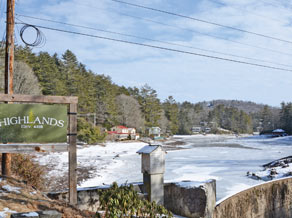 The town of Highlands may not be interested in investing millions to rebuild a hydropower plant along the Cullasaja River, but a private corporation out of Atlanta does want to make it happen.

Advanced Hydropower Inc., received a preliminary permit Jan. 23 from the Federal Energy Regulatory Commission to study the feasibility of a hydropower project on Lake Sequoyah after submitting an application last May.

“This project will deliver clean and renewable energy to the surrounding rural area while increasing electrical transmission efficiencies in Macon County,” Advanced Hydropower President Colin Gaines said in his application.

The town of Highlands owns the Lake Sequoyah dam and used to own and operate a hydropower plant that ran from 1927 to 1968. Town Manager Bob Frye said rebuilding a hydropower plant to supply electricity for the town was not feasible, but that hasn’t stopped Advanced Hydropower from trying.

A FERC notice states that the sole purpose of the preliminary permit is to grant Advanced Hydropower priority to file a license application during the term of the permit, which is 36 months. It doesn’t grant the permit holder the ability to disturb any land or enter land or water owned by others.

Horse Cove is worth a visit

Editor’s note: This column first appeared in a November 2003 edition of The Smoky…

The company estimated that the average annual energy production would be about 3,300 megawatts per hour based on 39 years of stream flow data provided by the USGS stream gauge.

According to Hydropower’s application, the project would not utilize any existing or planned dam because of the cost of meeting the federal waterpower license standards and the requirements under the Federal Power Act for Lake Sequoyah Dam. The project will use all new components except for the existing powerhouse and tailrace.

The diversion structure will create a small pool of water upstream of the weir. The weir will pool water about 30 feet upstream and result in a pool with a capacity of about 1,000 cubic feet.

The application states that the pool will be entirely within the Nantahala National Forest property and will not affect the normal operations of the Lake Sequoyah Dam or the Town of Highland’s Waste Treatment Facility.

Receiving the preliminary permit is just the beginning of a lengthy and expensive process to be able to start the hydropower project. The cost associated with completing the FERC application was $252,000 because of engineering plans, a feasibility analysis and reviewing hydrologic, water quality, wildlife and other types of studies.

Gaines did not return phone calls or emails requesting comment.

During the 60-day window for comments and motions to intervene to FERC, several individuals and agencies weighed in on the project. The North Carolina Wildlife Resources Commission filed a motion on Nov. 12 stating that the commission has a vested interest in the project because of its responsibility to protect public trust resources.

Because the commission manages the Cullasaja River and surrounding areas, “the Wildlife Resources Commission seeks to intervene as a party in this action and will advocate conservation of fish and wildlife resources and the recreational opportunities they provide.”

North Carolina Department of Environment and Natural Resources also filed a notice to intervene in November and requested to be a part of the proceedings since the project may change the quality and quantity of fish habitat in the river.

Henry Ross, a Highlands resident, submitted a letter opposing the permit. The last time a developer applied for such a permit in 1994, Ross said in his letter, homeowners, conservation groups, town government and the Chamber of Commerce came together and voiced their concerns to the permitting agencies.

“The opposition was so great that FERC and the developer withdrew the application,” he wrote. “I believe that after FERC has obtained adequate information, the project will not be attractive to the developer or FERC. If the developer goes forward, I will again organize a community coalition in a strong effort to prevent the project.”

The town of Highlands also submitted a letter to FERC regarding the permit application.

“Since we are an incorporated municipality of North Carolina that held the original FERC license and built the original power house cited in the application, the duly elected Town Board of Highlands affirms the town as a stakeholder in this proposed project and must be principals in deciding related issues,” Highlands Mayor Patrick Taylor wrote.

As outlined in Taylor’s letter, Frye said the town was concerned with the methodology of the applicant’s public notification. Instead of the notice being published in the Franklin Press, some 20 miles away from the property in question, Frye said, the notice should have run in The Highlander so the community would be aware of the permit.

“Since the town’s hydroelectric dam and lake where many residents have homes, are located next to the proposed project, the Town of Highlands requests better communication of the intent and progress of this proposed project,” the town’s letter stated.

Lastly, the town hired McGill and Associates, an area engineering firm, in 2013 to assess the feasibility of the town renewing its FERC license and resuming hydroelectric generation using the old power plant building. McGill’s report found the project could potentially have a major impact on the sensitive environment of the naturally flowing river and would impact the historic community site because operations would be adjacent to the scenic highway.

Frye said the process of getting a permit from FERC was a long and tedious one. The application has to get signed off by 22 state and federal agencies before it can be approved.

“But they have a perfectly legal right to do that — we’re not going to stand in their way, but they’ll probably find the same thing we saw,” Frye said. “There are some concerned people in town, so we just asked the applicant to keep us in the loop instead of just putting a notice in Franklin paper.”