The sweet dreams of snow days 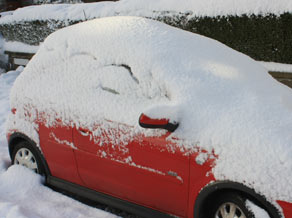 “Dad, do you think we’ll get out of school tomorrow?” My son, Jack, is standing in the doorway of our bedroom. Sunday night is bearing down again, and the weekend forecasts have been taunting him and his sister with the promise of a big snowstorm, which is supposed to begin around 7 a.m. on Monday morning, just in time to get them out of school. But he’s not quite prepared to buy in, not after having been burned already three or four times by faulty forecasts. What’s that song by The Who? “Won’t Get Fooled Again?”

Of course, I know just how he feels. I remember getting my hopes up on many a night just like this one, storms threatening but never materializing, clouds hovering on the horizon but refusing to move in, like shy boys clinging to the cafeteria walls at an eighth-grade dance. I would watch the 6 o’clock news and listen to WCOK, the local radio station for confirmation of the coming snowstorm. Yes, yes, there would be snow, and lots of it. Now sleep well, young fellow. You’ve got a big day in front of you, a day of sleeping in, sledding, drinking five cups of hot chocolate, and fighting with your sister.

The next morning, I would wake up and yank back the curtains in my bedroom in anticipation of seeing nothing but white everywhere I looked, an ever thickening blanket of snow covering the ground, the roof, the trees and the bushes, the birdbath and the mailbox, the doghouse and the driveway…and the roads, yes, the roads! Completely impassable unless you had a huge truck with chains, at least until the road graders and salt trucks made their way to your house, which could take HOURS! Sweet frozen nectar of the gods! I would sigh deeply with complete satisfaction, pull the curtain closed, and crawl deep down into the welcoming sanctuary of my bed, where I would sleep a deep, untroubled sleep until 11 a.m., quite possibly. Then I would stumble into the kitchen, still groggy but with a growing awareness of intense hunger, and eat half a box of Count Chocula out of a mixing bowl while watching “The Flintstones” or “The Brady Bunch.”

Outside, it would still be pouring the snow, six inches and counting. We might not have school all week! Better get my mom to pick up another box or two of Count Chocula, as well as some other essentials, such as fish sticks, tater tots, peanut butter, brown sugar and cinnamon Pop Tarts, two boxes of Neapolitan ice cream, a jar of dry-roasted peanuts, Doritos, a roll of cookie dough, chicken noodle soup, and TV dinners. And ice cream sandwiches. And barbecue Fritos. And Cokes.

I would wake up and yank open the curtain, expecting to see nothing but white, nothing but an enormous blanket of snow everywhere, blotting out all of the unpleasant features of my workaday world, and what do I see instead? The prosaic reality of things just as they always are, austere and exposed, every limb of every tree naked and trembling in the harsh winds of January, the whole miserable landscape completely untouched by even a flake of snow.

The only hope I had left then would be to rush to the phone and call the radio station, praying that it might be snowing furiously in some other part of the county, as it sometimes did, and school might still be out. During the winter, the local radio station would record a message letting us know whether the county schools were open or not.

Of course, every other kid in the county was also trying to call, so it might take 20 or 30 attempts to get through, only to hear the dreaded news: “Good morning, everyone! The schools in Alleghany County WILL be operating on a regular schedule! That gloomy forecast for a foot of snow was just a false alarm! I hope you kids did your homework! I hope you didn’t get your hopes up for a day off! Remember, kids, don’t let your expectations exceed your gratitude! Now have a great day at school!”

I hated that guy. My friends did, too. We complained about him bitterly when we got to school.

“That guy that makes the radio announcement is entirely too cheerful,” said my friend, Barry, as we choked down soggy chuck wagon sandwiches at lunch. “I think he likes rubbing it in. I bet he hates kids.”

“So, do you think we’ll have school tomorrow or not?”

I decide not to use the moment to teach him a lesson about expectations and gratitude. Lord, don’t let me be THAT guy. I hated that guy.

“May you drink deeply from the sweet frozen nectar of the gods,” I said.

I hope they do get that snow. There is never going to be any sleep quite so sweet or satisfying as going back to bed on a snow day when you’re supposed to be in class working on fractions or conjugating verbs.

Just in case, I had better go check on our stash of brown sugar and cinnamon Pop Tarts.

(Chris Cox is a writer and teacher who lives in Haywood County. His most recent book, The Way We Say Goodye, is available in regional bookstores and at Amazon. This email address is being protected from spambots. You need JavaScript enabled to view it..)