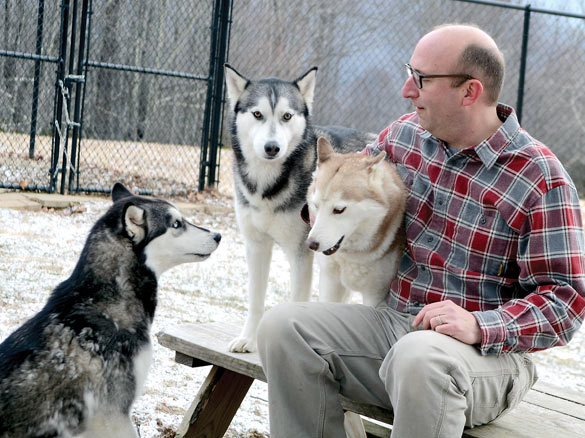 Stepping into Kirk Wall’s custom-carpentered, immaculately decorated mountaintop home, I couldn’t help but wonder if I’d knocked on the wrong door. Hardwood floors, vaulted ceilings, breakable horse figurines and pieces of pottery — not to mention, only trace amounts of dog hair — made it hard to believe that this place could be home to six large dogs.

But a sing-song howling had greeted me the moment Wall opened the door, and a glimpse into his first-floor bedroom revealed a row of six large dog crates bordering the wall opposite his bed. This had to be the right place.

Of course, in Western North Carolina, it’s not hard to find someone who owns six or more dogs. Wall’s pack is different, though, because they’re not your standard North Carolina hound mutt. They’re Siberian huskies — Natasha, Kiska, Qannik, Cheoah, Frankie and Typhoon.

Wall dubs his dog pack The Thundering Herd. They’ve got their own website and blog — their human does the updates on it, as paws aren’t great for typing — and spend their days embarking on adventures and misadventures in the Western North Carolina backcountry.

“To me there is absolutely no better day in the world than to be on a trail in the Pisgah National Forest or the Blue Ridge Parkway,” said Wall, who is recently retired from a career in the financial industry. “You’re out on a trail with your dogs, yourself, your backpack. It’s awesome.”

Hiking is a relatively common hobby in WNC. But for Wall, it led him to pursue a not-so-common pastime: mushing. Or, for those not familiar with the lingo of the far north, running a dog team.

“Everybody asks you, particularly when you’re walking six, ‘Where’s the sled?’” Wall said. “I was always just curious about it. How did you mush?”

He decided to find out.

Though his dogs are all rescues, Wall likes going to dog shows to see the best of the breed. At one of those shows, he met Karen Ramstead, 11-time Iditarod musher and willing advisor to a beginner like Wall.  He got some advice, got some equipment and got to mushing.

The sport looks pretty different in the North Carolina Smokies than it does in Alaska or Canada.

“Here, you never get the snowpack you need to run,” he said.

Running a dogsled requires at least 6 to 8 inches of hard-packed snow, because the only way to stop the sled is using a big, pronged hook called a snowbreak. The snowbreak needs a certain amount of snow on the ground to do its job.

Wall has never used the sled he bought for snow mushing. Instead, he makes his runs on a wheeled contraption that’s part bike, part scooter and part dogsled. He stands on a small platform between two fat wheels. A gangline to which the dogs’ custom-made harnesses attach hooks into a ring on the front, below the handlebars, which feature handbrakes like a bicycle’s.

He’s got another scooter, too, that more resembles an actual dogsled. Instead of handlebars that allow him to steer, he directs the sled by the way he leans. And instead of pressing a handbrake, the sled uses a groundbrake much like the ones on snow sleds, but adapted for dirt roads.

Wall hasn’t used either sled this winter, though, because his pack is without a leader.

Any dog team involves four separate roles — lead, swing, team and wheel. The wheel dog is the one responsible for pulling the sled around obstacles and is usually the burliest of the bunch. The swing dog helps the sled swing around those obstacles. The team dogs just help pull. The lead dogs, however, have the most important role. It’s their job to route the sled, listening to the musher’s commands and combining those wishes with their own knowledge to skirt obstacles and avoid danger. Huskies are bred to think for themselves, a trait that makes the breed both entertaining and frustrating, depending on the situation.

“It’s all mental work, and it’s exhausting,” Wall said of the lead role. In longer races, the lead dog will typically switch out with the swing to rotate responsibility.

Wall’s lead dog, 12-year-old Natasha, learned the role almost by accident. When he hikes with the dogs, Wall connects their leashes to a waist belt he wears — the first rule of keeping huskies, he said, is to never let them run off-leash, because they won’t stop — and Natasha was quick to pick up on the commands for left and right.

“When we came to a fork in the trail I’d say ‘gee’ or ‘haw,’ and she would take the correct fork,” he said.

That made things a lot easier, because teaching the first lead dog how to do its job is the hardest part. After that, another dog can learn just from being hooked up beside the lead. In The Thundering Herd, Cheoah had been that student.

But then both Natasha and Cheoah got their knees hurt within weeks of each other, both in separate, non-mushing-related instances. While they recover, Wall doesn’t have a lead and The Thundering Herd is out of harness.

They’re still thundering away, however. When I stepped outside to say hi — the dogs love cold weather and often don’t want to come in at night, even when temperatures dip into the teens, Wall said — the huskies were on their hind legs with excitement. Especially Typhoon, a 2-year-old male with one blue eye and one brown.

“You know it’s trouble when you name a dog after a natural disaster,” Wall laughed.

Typhoon is not technically part of the dog sled team yet, since last winter he was too young to mush. But the “thundering” adjective still applies to the team, Wall said, and is more of a self-deprecating joke than it is an intimidating team name.

In a well-trained dog team, “the dogs get into a rhythm and are as quiet as can be,” he said. “Therefore, calling a team ‘The Thundering Herd’ is a joke because they’re not supposed to be thundering. They’re supposed to be quiet.”

Learning from the best

Though I didn’t get to see Wall’s dogs in harness, I can easily attest to the fact that out of harness, they’re anything but quiet. No barking, but lots of vocalization.

“What you get from them all the time is this sing-song talking,” he said. “You can kind of hear them when they’re talking back at you, and they have this lengthy vocabulary. I can get into a full-fledged conversation with them.”

Soon, he hopes to be able to tell his dogs all about how to hone their sledding skills. On the planning committee for Maggie Valley’s inaugural WinterFest Smoky Style festival, Wall is excited to learn from the eight to ten mushers he expects to show up to demonstrate their sport.

Still, Wall doesn’t know of anyone else in WNC who runs a dog team. There’s no reason for that to be true, he said, and there’s no reason that Maggie Valley couldn’t host the country’s earliest or last dog race of the season.

“As you get to the end of that season, they don’t have snow either unless they’re in Canada or something like that, so they convert to dryland rigs,” Wall said of mushers further north.

There are icy patches amid the bare ground, and dryland rigs just don’t work. Enter WNC, home of amazing scenery, miles of the dirt road needed for racing and clear ground for most of the year.

There are plenty of other places in the South with snowless dirt roads, but WNC also boasts chillier temperatures than other part of the region. For mushing, that’s important, regardless of whether the rig is set for snow or dry land.

“You can’t overheat the dogs, so it tends to be a winter sport,” Wall said.

“We know in the summer all the towns in this area work really hard to have events every weekend,” he said. “Why can’t we have them in the winter?”

Sure, North Carolina isn’t exactly known for its epic snowfall, but WNC has a ski resort and plenty of hiking trails, biking routes, local crafts and other ways to enjoy the region during cold weather.

For more than just dog mushing, but mushing is, obviously, Wall’s winter sport of choice. He’d love to see the event have its own officially sanctioned race in WNC, bringing in skilled headliners but also including smaller races for amateurs.

It’s rewarding, though, and gives an energetic outlet to dogs that have been bred to run for hours without stopping.

“They are very intelligent and very mischievous at the same time,” Wall said. “It creates this dog you never know exactly what it’s going to do next, and it’s very entertaining.”

Wall’s got an escape artist, an incessant public speaker, a couch potato and a hyper jock — hilarity ensues every day.

Things are never boring in The Thundering Herd.

Maggie Valley’s inaugural WinterFest Smoky Style will celebrate the best of the cold-weather season from 9 a.m. to 5 p.m. Saturday, Feb. 28, at the Maggie Valley Festival Grounds.

Amateur sled dog owners will compete in a weight-pulling competition, officially sanctioned by the International Weight Pull Association, and sled dogs, Plott hounds and police K9s from around the region will also show their stuff with demonstrations throughout the day. Of course, the weather is always a gamble.

“That’s why we are calling the event ‘WinterFest Smoky Style,’” said Maggie Valley Mayor Ron DeSimone. “We have no idea whether it will be sunny and dry, raining or a snowstorm.”

The cast of “Hillbilly Blood,” a Discovery Channel reality television show about surviving in the mountains filmed in and around Haywood County, will demonstrate survival skills, and there will be plenty of activities geared toward children.

Friday morning, 9 a.m. to noon, the Lens Luggers Photographic Association will add their interpretation of celebrating winter with a photography seminar, followed by a guided photo shoot in the Great Smoky Mountains National Park the next morning. The club will sponsor a photo contest for $7 per entry, with prizes for first, second and third places.

In addition to the daytime festival Saturday, banquet dinners will be held Friday and Saturday evenings at the Maggie Valley Inn.

Proceeds from banquet and festival admissions will benefit Friends of the Haywood County Animal Shelter, a newly formed nonprofit aiming to raise money to build a new county animal shelter.

Thunder with the herd

Kirk Wall keeps a daily blog detailing — with photo documentation — the antics of his husky herd. Take a look at www.thethunderingherd.com.