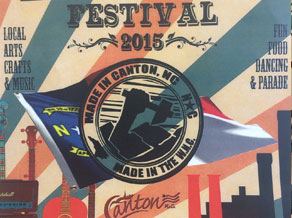 Canton’s annual Labor Day Celebration has been a beloved community tradition for more than 100 years.

As attendance and excitement have started to wane over the last few years, however, the town is looking at ideas to revamp the holiday weekend events, including bringing in a nationally known band for a Sunday night concert at Pisgah High School’s stadium.

“For 108 years, the festival has been one of our greatest assets,” said Town Manager Seth Hendler-Voss at a recent board workshop. “It’s seen some decline over the years, but we want to bring it back to its former glory.”

Mayor Mike Ray said he didn’t want to start the conversation about Labor Day with negativity.

“Let’s look at improving what we have,” he said. “Even though people put stuff on Facebook, we’re proud of our town and what we do.”

Hendler-Voss said the board adopted an economic development initiative last year to move the town forward. The plan included five goals: to leave their comfort zone, take calculated risks, learn from failures, understand the need for change and be pro-active.

The Labor Day planning committee has been working on recommendations for improving the event based on input from a community survey. Assistant Town Manager Jason Burrell, who serves on the planning committee, said possibilities included scaling back the event from four days to two days, getting rid of the mechanical rides, booking a popular band and moving all other activities from the recreation park to Sorrells Street Park downtown.

To make the event a success, Hendler-Voss said it needed to rebranded to set Canton apart from other towns. He suggested returning to the event’s roots and celebrating everything “Made in Canton.”

“We need to go back to the roots of our event, which started as a tribute to the mill,” he said. “We need to harness that energy and do a better job of telling our own story.”

Burrell said the recreation park has been a great location for the event but moving it downtown would make it more prominent to people driving through. His hope is that more people will stick around for the other events on Monday after the parade if they only have to walk over to Sorrells Street Park.

“The visibility in downtown will help attendance, and MaterFest has been successful in having it there,” Burrell said. “We want to expose more people to our community — what better way to do that than have it downtown?”

Changing locations would require a portable stage and some additional costs associated with getting a temporary power panel for food vendors and the musical acts.

“Since this board has been elected, we’ve wanted to be bold and take risks,” said Alderman Zeb Smathers. “It belongs downtown because that’s where it started. I’m in support of embracing all these ideas.”

Lisa Stinnett, Canton’s special events coordinator, said when comparing the town’s event to others in the region, most were two-day events held in a central downtown location that did not feature rides.

“We just can’t afford the rides the kids want,” she said.

The rides would be replaced with a kids’ zone that would include several inflatables, crafts, games, face painting, magicians, balloon animals and more. Instead of paying per ride, parents could pay $10 for a wristband that would allow kids to partake in all activities the entire day.

Burrell said FOCUS of Canton would still host a carnival with mechanical rides in the summer for kids. He added that many families attend the state fair around that time of year for the rides, and the town just can’t compete with the quality of those rides.

The community survey found that a majority of residents would attend the event without rides and would pay up to $20 a ticket for a concert.

The town’s festivities usually begin Friday night with Pickin’ in the Park; music, rides, food vendors and other activities Saturday at the recreation park; gospel music Sunday; and the Monday parade and continued entertainment at the rec park.

If the event was shortened to Sunday and Monday, Burrell said Pickin’ in the Park would continue on Friday night, but no events would be held Saturday. Gospel music would be moved to the Colonial Theatre on Sunday and other entertainment, food vendors, car show and a kids’ zone would be held at Sorrells Street Park. Then the concert would begin at 7:30 p.m. Sunday. Monday would include the parade followed by more music, food and entertainment for children downtown.

Hendler-Voss said the new recommendations would satisfy the local community by providing the traditional events residents love and also providing a regional draw with a headlining concert. It’s been done before when The Beach Boys and Charlie Daniels played several years ago. The town would have to get approval from the school system to use the stadium.

With most bands booking shows for Friday and Saturday nights, Hendler-Voss said it would be an ideal opportunity to catch a band already coming through the area and ask if they’d play a Sunday show in Canton.

Board members also discussed having a popular regional act like Balsam Range open up for the headlining band to bring in local folks.

In the past, the town has usually budgeted about $20,000 for Labor Day festivities. Hendler-Voss said the cost would increase to about $135,000 if all the recommendations were implemented. But he’s hoping community and corporate sponsorships and ticket sales would help offset the extra expense.

Ray said he wanted to be careful not to spend all the town’s money on the Labor Day festivities and provide several good events for residents throughout the year.

Smathers said it would be important for the town to get big sponsors and sell enough tickets to lessen the taxpayer burden in case the concert is rained out.

Hendler-Voss said the town needed to sell at least 3,000 concert tickets, but the stadium can hold up to 8,000.

The board was in consensus to move forward with researching the changes and seeing what bands would be available to perform.