The bizarro world of plan revision 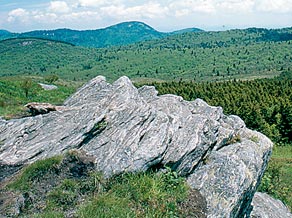 The Haywood County Board of Commissioners decided that today (Feb. 2) was the day they would boldly venture into the world of Forest Plan Revision. They did this by unanimously passing a “non-binding” resolution, which had been publicly vetted — oh, wait there was no public comment unless you count the informal poll among board members where they asked each other if they had been approached by citizens regarding the Forest Service (FS) plan revision. This resolution, titled “Resolution in Opposition to Pisgah National Forest Land Management Plan Revision” miraculously manages to simultaneously oppose and support almost every stakeholder issue surrounding the current, federally mandated Nantahala/Pisgah Plan Revision process currently underway.

The first “whereas” decries the FS’s proposal to reduce the number of management areas from 21 to 16, which commissioners somehow equate with “less forest management,” which, in turn according to following whereases, “will negatively impact future search and rescue efforts, and increase their frequency, difficulty and cost, by limiting necessary maintenance to roadways and trails, and reducing necessary signage; and … negatively impact recreational uses, therefore impacting tourism and the local economy.”

I am reminded of the guy who wanted his pizza cut into six pieces because he didn’t think he could eat eight. The plan, or at least the draft plan that the title of the resolution implies commissioners — speaking on behalf of Haywood County — oppose because it reduces the slices of pizza, is the same plan that increases the number of acres across the national forests that would be open to “management,” aka timber harvesting, by 200,000 acres. So they are opposed to the plan based on the assumption that adding 200,000 acres to the timber harvest base will ultimately result in “less forest management?”

But the “Be it resolved” at the end of this strangely worded resolution may hold the key to it’s intent: “Now therefore, be it resolved that the Haywood County Board of Commissioners do hereby stand in opposition to any additional wilderness/designated areas where land management practices are reduced within Haywood County.” Ah, so that’s what this is about — wilderness areas in the national forests. And why shouldn’t a county that generated more than $155 million in tourist spending in 2013 be concerned about un-managed wilderness areas. After all, they stated in their resolution that, “less forest management will negatively impact recreational uses, therefore impacting tourism and the local economy.”

That being the case, it’s easy to see that commissioners certainly wouldn’t want any more areas like Shining Rock Wilderness — the largest, most visited wilderness area in the Nantahala/Pisgah complex, which sees more than 50,000 visitors annually according to a report from 2001. It is, as the King of Siam would say, a puzzlement.

(Don Hendershot is a naturalist and a writer. He can be reached at This email address is being protected from spambots. You need JavaScript enabled to view it..)