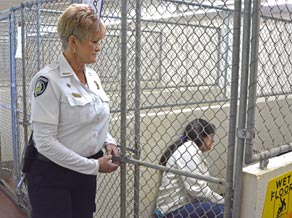 While Jackson and Haywood County are struggling with inadequate animal shelter facilities, Swain County lacks a facility and an ordinance to deal with stray or nuisance animals. Dedicating more funds toward animal control services isn’t exactly a top priority for counties trying to cut costs and still provide for taxpayers, but animal activists have been vocal about the importance of addressing the issue.

“I think civilizations are judged by how they take care of their young, their old and their animals, and I think we need to do a better job of taking care of our animals,” said Commissioner Vicki Greene at a recent Jackson County Commissioner meeting.

Several residents who had concerns about the county’s current animal shelter recently approached Jackson County Commission Chairman Brian McMahan. He said the more than 40-year-old building on Airport Road in Cullowhee was inadequate for current needs.

“We’ve got people who have told me we could probably almost adopt every single dog in this county out if we had big enough of a shelter that we could house them a little bit longer than we do now,” he said. “I really want us to think about are there opportunities in this budget year coming up, or whenever, that we can maybe make some improvements to our animal shelter.”

McMahan said Jackson County might be able to partner with Swain County for some type of regional approach to animal control since Swain is in desperate need of a shelter.

Jackson County Manager Chuck Wooten said some renovation work had been done at the shelter in the last two or three years after a dog that had bitten someone escaped. Renovations included adding fencing around the runs and replacing the floors for easier washing.

But another issue that hasn’t been addressed is the lack of handicap accessibility at the shelter and the fact that the shelter is not centrally located.

“Wouldn’t it be nice if you had a real easily accessible facility with space at the front where you could do adoptions?” McMahan asked.

Wooten cautioned that moving the shelter to a more populous area may result in a “not in my backyard” attitude from residents who wouldn’t appreciate barking dogs next door.

Leaders in Swain County have been discussing a solution for animal control problems for years, but the county still lacks an animal control ordinance.

In 2009, the county stopped contracting with a company that made weekly rounds to pick up strays and the burden has rested solely on the organization Placing Animals Within Society, a nonprofit no-kill shelter in Bryson City.

As for an animal control ordinance, the topic can become contentious when trying to regulate barking dogs. Swain Commissioners have been faced with complaints recently about dogs running loose through someone’s property and a dog biting someone else’s cat.

“We’re going to gather information and go from there as far as seeing how to get an ordinance that fits Swain County’s needs,” Bushyhead said.

This has been an ongoing issue, but Bushyhead said a couple of complaints have definitely added to the problem. He said the commissioners are open to partnering with other counties on a solution, whether it’s through a joint animal shelter or another project. While Jackson has expressed interest, Bushyhead also is looking into what Clay and Graham counties are doing for animal control.

He said the first priority is to get an animal control ordinance in place and establish a plan for how the county deals with these issues because P.A.W.S. has limited resources and space.

“We need to authorize someone to deal with these issues as they arise and empower them to make decisions because right now we have nothing on the books,” Bushyhead said.

Haywood County also is in the process of building a new animal shelter with the help of a newly formed nonprofit group — Friends of Haywood County Animal Shelter.

Haywood County Manager Ira Dove gave commissioners an update on the progress at the last meeting. The animal shelter was constructed in 1988 with public and private funds. Dove said the block-wall building wasn’t sound proofed or insulated and the space is now inadequate.

Volunteers with the Friends group told commissioners last month that they would work to get a schematic drawing from an architect for commissioners to consider.

“However, after researching, it’s been determined an architect can’t donate resources in anticipation of obtaining engagement from the commissioners,” Dove said. “Therefore an official selection process needs to be put forward by the county so we can move forward officially.”

He said the standard process would be used — a request for qualifications would be advertised for architects who have experience in designing animal shelters and who are familiar with the different town ordinances since commissioners don’t know where the shelter might be located at this point.

Commissioners unanimously approved putting out the RFQ. After the proposals are received, a committee made up of Dove, Animal Control Director Jean Hazzard, Finance Director Julie Davis, Public Works Director Dale Burris and a couple of the Friends board members, will review them and make recommendations to the commissioners.