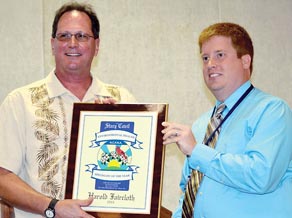 “I had been so busy with my duties and responsibilities in my position in addition to my research and analysis of the lead in private drinking water wells that I didn’t expect anything,” he said about his award. “I feel as though I have been admitted to a special fraternity of achievers and scholars involved with environmental health.”

The discovery of lead contamination in private drinking water wells began in 2012 when Faircloth was performing routine inspections on newly permitted wells in Macon County. The first several findings of contamination led to a larger investigation, and now more than 240 wells have been identified with lead levels exceeding the Environmental Protection Agency’s allowable contaminate levels.

The investigation, which is still ongoing, revealed that the source of the contamination is from galvanized pipe imported from certain foreign countries. However, the investigation has been unsuccessful in identifying a specific source yet because the type of pipes used where contamination was found is not limited to one area, one subdivision, one driller or one contractor.

Faircloth was cited for his dedication in understanding the complex chemistry of lead in groundwater and his sense of responsibility to the health of the public.

“They don’t give the award every year,” Patterson said. “It’s a big deal… he’s the lead guru around here.”

Faircloth has worked with the Macon County Health Department for nine years after moving to the area from Florida. Before moving to North Carolina, Faircloth worked in water quality in Florida. He graduated from Florida State University focusing in biology and chemistry.

“FSU is known for its tough chemistry department,” Faircloth said.

Patterson said Faircloth was a tremendous asset to the environmental health department even before the lead investigation began. Faircloth started with the department three years before the statewide well program was started in 2008.

“He came in at a very busy time and we were behind. He helped us catch up,” Patterson said. “At that time, we were in the dark ages working on paper files. Harold helped us in the transition to full electronic and paperless files. He also helped us with GPS and starting databases for the wells.”

Just as Faircloth was coming on board, North Carolina had started the Private Water Supply Well Program, which requires local health departments to permit, inspect and test private drinking wells that were constructed, repaired or abandoned after July 1, 2008. Before that time, there were no records of private drinking wells in the county.

“I knew the well program would be a good thing for the state though I knew it would also be contentious,” Faircloth said.

Residents would like to keep their wells private, but the truth is that wells, which provide untreated water, can cause a public health risk. And without the program, this contamination would have never been discovered.

“People assume if they have a private well there’s nothing to worry about,” Patterson said. “North Carolina has some of the best water in the country, but there’s always potential issues when it’s not treated water.”

For example, if Faircloth had not found the lead leaching in these wells, children, adults with compromised immune systems and senior citizens could have been at risk for lead poisoning.

While the consequences of lead in the water supply depend on the level of contaminants and the length of exposure, Patterson said lead has been found to have a negative impact on IQs in young children and can cause a number of problems in elderly adults.

The Macon County Health Department is still looking to locate private drinking water wells that have lead leaching. Since the investigation was made known to the public in 2012, the health department has had 600 to 700 people come in to have their water supply tested.

“And we don’t know how many are out there because so many were installed before the state well program was in place,” Faircloth said. “Anecdotally, contractors have put in miles of this pipe.”

The health department inspects about 350 new wells a year and has 2,400 wells in its database right now. Faircloth and Patterson continue to encourage people to educate themselves about their well system and to call if they suspect they might have metal pipes.

A majority of wells nowadays use PVC pipe, but Patterson said the deeper the well, the more likely metal pipe was used for more torque. Mountainous regions are going to have deeper wells. Patterson said wells that are 500-plus feet deep would most likely use metal piping.

If a property owner doesn’t know whether their well has metal pipes, they can either find out who drilled the well or they can simply get their water tested. Faircloth said water from a well with metal pipes typically has a detectible level of zinc in the sample.

Patterson said people should call the health department for specific instructions on how to collect a water sample before bringing it in for testing.

“You can’t just bring in a mason jar of your water,” he said.

“My objective and responsibility as an environmental health specialist is to inform and educate the public as far out from Franklin as possible after understanding the scope of the lead contamination problem in private drinking water wells,” Faircloth said.

The state is now involved in the investigation, but Patterson said he thinks the contamination is more far-reaching that just Macon County.

“We’re convinced this is happening in other counties because it’s so widespread,” he said. “I think they just aren’t aware of it.”

Faircloth said he would continue to speak publicly to educate his environmental health specialist colleagues, medical professionals, realtors, property owners and government officials about this issue.

For more information about how to test private well water, call the health department at 828.349.2081.