Ghost Town not for sale 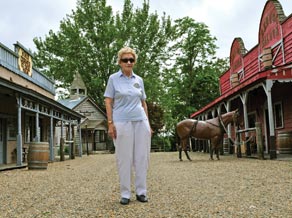 Ghost Town owner Alaska Presley was willing to sacrifice a piece of the theme park property to generate some cash for her Resurrection Mountain project, but a new opportunity has come along that will hopefully allow her to redevelop the entire park.

After being on the market for several months, a portion of Ghost Town in the Sky in Maggie Valley is no longer for sale.

Chris Chagnon, a Realtor with Action Creek Reality in Maggie Valley, said Presley had asked his company to market the western theme park property only — not the upper property where she plans to construct a Holy Land replica theme park. However, the listing was pulled on Jan. 24.

“Ghost Town is no longer for sale. It has been removed from the market,” Chagnon said. “Over the past weeks (Presley) has had major breaks on her redevelopment of some of the property and good things are in the works.”

Action Creek had 98 acres of the Ghost Town property listed with an asking price of $3 million. The listing stated that Ghost Town now has city water and that it was profitable in 2014.

Chagnon said Presley listed the property during the 2014 season to see if it would spark any interest and if any investors would come forward. While the property got several bites, he said Presley turned them down.

“At the same time, she was also working on other avenues and there’s one that has come through,” he said. “Now the park is going to be developed into something …  Resurrection Mountain with the cross, that’s moving forward, but that’s only a portion of what’s being done with the property.”

Chagnon said key people have come on board to help with redeveloping the entire park, but he wouldn’t release any more details at this time. He and Presley are meeting with a public relations firm next week, and if all goes as planned, he said, a press release would be sent out in the coming weeks with a big announcement.

While there have been several proposed plans for Ghost Town that haven’t come to fruition, Chagnon said this one is different because it’s being put together properly.

“Alaska’s vision has become very realistic now,” he said. “She has a team of people taking it to the next level and she’s more excited than ever.”

Presley established the Alaska Presley Faith Foundation as a nonprofit corporation in 2013, and Resurrection Mountain will operate under the foundation.

In its heyday from the 1960s into the 1990s, Ghost Town attracted hundreds of thousands of tourists each year to Maggie Valley and Haywood County. It eventually fell into disrepair, however, and its original owner R.B Coburn closed it in 2002.

Presley, 91, purchased Ghost Town for $2.5 million on the Haywood County Courthouse steps in 2012 after it went into foreclosure. Her hope was to leave a legacy she could be proud of by restoring the mountain, increasing tourism in the valley and building Resurrection Mountain.

She has since put millions more into the mountain to make much-needed repairs. A majority of the park had to be rewired and the process of getting city water up the mountain was an expensive struggle.

Before Ghost Town could open for the 2013 season, the North Carolina Department of Labor told Presley the chairlift wouldn’t pass its inspection unless she had an emergency evacuation route.

Snaking a road up the mountain directly under the chairlift was not an easy task — the slope was steep, large rocks had to be excavated and it had to meet all the county’s environmental standards. The road took longer than expected to complete and cost Presley an additional $500,000 when everything was said and done.

While the original plan was to open Memorial Day weekend, the failed inspections forced Ghost Town to wait until July 4 to open for business.

The 2014 Ghost Town season was postponed until July 4 as well because of issues with getting the water pumped up the mountain and because several of the kiddie rides and the chairlift failed inspections. Despite many negative reviews on TripAdvisor from unhappy Ghost Town goers, Chagnon said 2014 was a good year for the park,

“Ghost Town turned a profit for the 2014 season, the water project has been completed finally and it is time to take the property to the next level,” Chagnon said. “Alaska is excited about the future of the property, and we look forward to letting you know as soon as final details are worked out.”

Since purchasing the park, Presley has had a vision of restoring the park before starting phase 3 — Resurrection Mountain. She wants to remove many of the dilapidated amusement park rides located on the upper level of the mountain and construct a replica of the Holy Land.

Visitors will walk through the life of Jesus Christ from his birth to his resurrection, from the nativity scene in Bethlehem to the empty tomb. With the plan all mapped out, Presley and her team of supporters have been looking at fundraising options and trying to bring investors on board before starting construction.

Presley did not return a phone call seeking comment.