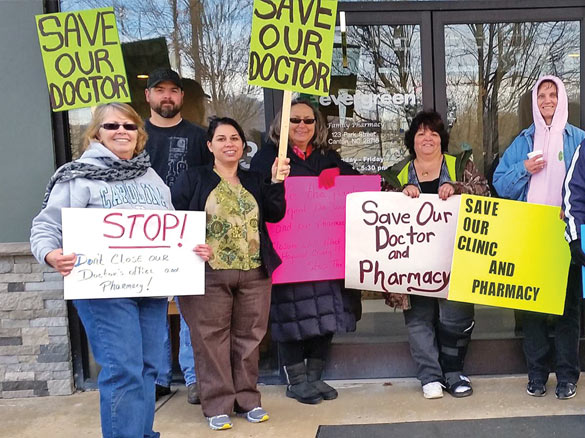 Evergreen Packaging in Canton plans to close the Evergreen Family Medical Center and pharmacy on March 31, but county officials are working behind the scenes to entice one of the area hospitals to keep it open.

Evergreen employees and their families are now rallying around Dr. Tony Jones and his staff at the clinic and pharmacy with the hope that Haywood Regional Medical Center, recently purchased by Duke LifePoint, or Mission Health in Asheville will swoop in to save the day.

Traci Hoglen, of Canton, has planned a second rally in Canton so employees and their families can come out and show support for keeping Jones in the community.

“We’re not fighting the mill — the union does that — we’re fighting to keep Dr. Jones and the pharmacy in the county,” she said. “We want Mission or Duke (LifePoint) to hear us and see how valuable they are to the community.”

Employees began receiving a letter from Evergreen’s Human Resources Manager Mike Culbreth on Dec. 31 — even though the letter was dated Jan. 5 — informing them of the clinic closure.

Hoglen said she called Dr. Jones’ office as soon as she got the letter in the mail only to find that Jones and his staff were just finding out about it as well. Evergreen doesn’t own the clinic, she said. It contracts with a different company that owns the clinic and pharmacy.

“They made so many mistakes in sending this letter out. They should have sat down with the doctor at least nine months ahead of time so he can let his patients know what’s going on,” she said. “Somebody literally put the cart way before the horse.”

“Though the clinic has been open for a number of years, the volume of patients has declined over time to the point that continued operation is no longer feasible,” Culbreth wrote  in the letter.

The letter also included a list of pharmacies and a link to physicians in the area that are accepting new patients.

Knowing there is a shortage of family physicians in Haywood County, Hoglen said she called all of the physicians on the list to see if they were in fact taking new patients.

“About 80 percent said they had no openings and the rest told me a couple of doctors had a couple of openings but they were already booking people out to April,” she said.

She said there are always cars in the parking lot and sometimes she has to wait a week or two for an appointment.

“You don’t ever go by there without it being full of people,” said Deb Fincannon, a former Evergreen employee.

In a prepared statement, Dane Griswold, Evergreen general manager, said the company was committed to providing high quality, affordable health care to its employees and understands the impact this decision may have on employees and the community.

“By making this announcement as the New Year begins, we have given three months advance notice of this decision in order to provide employees with ample opportunity to research and transition to other providers,” he said. “Evergreen’s Human Resources professionals are prepared to assist employees and their families with the transition.”

As someone with a business degree and experience being in a supervisory position, Fincannon said she understands Evergreen is a corporation that must take into consideration how much money it spends to keep the clinic in operation. On the other hand, she sees the people who will suffer if the clinic and pharmacy are closed.

“They’re looking at the bottom line and that’s what companies do, but sometimes you have to do the right thing and think about your people,” she said. “If you have happy and healthy people, you have productive people.”

Fincannon’s family helped build the mill and has had four generations work there, including her father who worked there for 50 years. Her fiancé and her son-in-law also work at the mill. She worked there for 13 years before she became ill.

“I’m disabled now — I have both heart and lung disease,” she said. “Dr. Jones has been my doctor since the day he came here and he literally saved my life.”

When Jones suspected she had a heart condition, he sent her to specialists in Asheville to get the care she needed. Since then she has gone to see him at least once a month.

Alvin Forney has worked at the mill for 40 years and has witnessed a lot of change, but this is one change he hopes doesn’t happen. He has participated in the mill’s diabetes program since he was diagnosed in 1997.

The program pays for all of Forney’s diabetes related medicines and supplies as long as he sees Dr. Jones regularly and has his blood sugar readings monitored. With the cost of prescriptions going up every year, he doesn’t know if he’ll be able to afford all his diabetes medication in addition to his other prescriptions.

He said he has saved more than $900 just in the last three months thanks to his insurance and the diabetes program. Forney understands it costs the company money, but it would probably cost the company more in the long run if employees don’t get the preventative care they need.

“I only pay $25 every time I go to the doctor so it’s been very beneficial for me. I also have sleep apnea and arthritis and those medications start to add up,” he said. If the diabetes program is cut out along with the clinic, “There’s going to come a time where I’ll have to decide whether to take my medicine or feed my family.”

Patients of Jones have nothing but good things to say about him and the staff. After forming relationships with the staff and doctor for more than 10 years, patients say they will be hard pressed to find another doctor that will go above and beyond the call of duty like Jones.

Hoglen’s husband has worked at the mill for 34 years and they both utilize the clinic and pharmacy. She is allergic to many medications and said Jones and the pharmacy go out of their way to make sure they provide her with the right medications.

“ I had an allergic reaction to a medication they gave me once and within five seconds, Dr. Jones had me in a room and injected me,” she said.  “And then he called me after hours himself to check on me. Nobody does that anymore.”

The pharmacy staff also knows she is highly allergic to many components found in medications. Hoglen said the pharmacist calls the pharmaceutical company every time Jones prescribes a new medicine to double check the chemical makeup to ensure it won’t cause an allergic reaction.

“If there’s one little thing in it, they go to Jones and get him to change it,” she said. “Dr. Jones spends his private time researching and looking for something for me to take. And he’ll schedule 45 minutes to an hour with me if that’s what I need.”

Hoglen said she wasn’t against Jones having to accept other patients as long as it meant he stayed in the community. Mill employees have Blue Cross Blue Shield health coverage and that is the only type of insurance the Evergreen Family Medical Center accepts.

That means Hoglen can’t use her secondary Tri-care insurance coverage at the clinic or pharmacy, but she doesn’t mind paying a little more out of pocket to stay with Jones.

“I choose to pay my deductible and co-pays and whatever for my medicines because that’s how valuable they are to me,” she said.

Fincannon agreed that Jones was not just a great doctor but also a wonderful human being who cares about his patients. If he leaves Haywood for a practice in Asheville, she said she would just drive farther to see him.

“Those people are family to us. They know us better than we know ourselves,” she said.

Evergreen Family Medical Center declined to comment on the situation until all is said and done.

Fincannon said they are just trying to get the word out in the community because if the clinic closes, it affects all of Haywood County if thousands of people are in need of a new doctor starting in less than three months.

When asked for comment, the new HRMC CEO Phillip Wright said, “We were surprised to hear the news of the clinic’s closure, but cannot comment further on this now.”

Mission Health could also potentially be interested in acquiring the clinic or make Jones a part of their network. Mission purchased 23 acres in Clyde earlier this year to build a My Care Plus facility that will offer primary care, specialty and ancillary services.

The decision to expand into Haywood came after Mission completed an extensive study of primary care and specialty services in the region. As of August, Haywood County had about 15 primary care physicians, which could be why Mission saw some 9,000 patients from Haywood County in 2013.

In a prepared statement, Marc B. Westle, Mission’s senior vice president of innovation, said Mission Health strives to provide convenient, quality and affordable care close to where people live and work across our multi-county service area.

“If an under-served area is identified, such as the closing of the clinic at Evergreen Packaging, Mission evaluates if we are able to offer services through a sustainable model of care that meets local needs,” he said. “We have reached out to Evergreen Packaging and look forward to discussing their needs and whether we can support them.”

Canton Board of Aldermen unanimously passed a resolution at its last meeting expressing support of keeping the clinic and pharmacy open. Town Manager Seth Hendler-Voss said he would draft the resolution and deliver it to Evergreen as soon as possible.

Mayor Mike Ray said he was hopeful something good would come out of the situation after talking with County Commissioners Mark Swanger and Bill Upton, Economic Development Director Mark Clasby and the new Haywood Regional CEO Phillip Wright.

“I feel like it’s a good situation they’re going to move on and have for the people in our area,” Ray said. “The powers that be are very interested.”

Alderman Zeb Smathers said the best thing was that the community was coming together to keep their doctor and pharmacy.

“Canton always pulls together — that’s what we can depend on,” said Alderwoman Gail Mull.

In the meantime, Hoglen and others have planned a rally from 11 a.m. to 2 p.m. Thursday, Jan. 15, in the parking lot of the Smoky Mountain Local 507 in Canton. Everyone is invited to attend.

Supporters can find petitions to sign around the county, including Black Bear Café, Sellars Florist and Exxon Radio Hill in Canton, Single stop BP in Clyde, and Citgo in Waynesville. Stay updated on progress on the Facebook group, “Petition to Save Our Doctor and Pharmacy.”