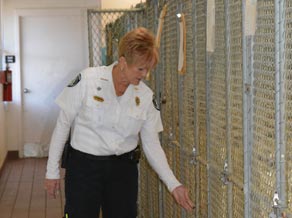 A movement to build a new animal shelter in Haywood County is in the early conceptual stages.

Animal lovers say a modern, more spacious animal shelter is needed, despite a daunting price tag and a sizeable drop in animals taken in to the shelter each year.

“The animal shelter we have now is outdated,” said Dr. Kristen Hammett, owner of the Animal Hospital of Waynesville.

The current animal shelter is a utilitarian, no frills cinderblock building on a concrete slab. Rows of cages and kennels stretch the length of the long, narrow shelter.

The design does the job it was intended for when built in the late 1980s: a temporary storage house for animals awaiting adoption or euthanasia. But the public’s expectation of an animal shelter today has changed, Haywood County Animal Services director Jean Hazzard said.

“We know it is needed and we know the problem is never going to go away,” Commissioner Mike Sorrells said.

Hammett and Hazzard said they got the signal of support they needed to now begin a more formal planning process.

“I think this county needs an up-to-date modern animal shelter,” Commissioner Mark Swanger said in an interview. “There is no doubt about it. It is who we are as a society, and I support it.”

However, commissioners’ willingness to put up money for a new animal shelter will hinge on fundraising. Private donations would be needed to offset the cost of the shelter.

Swanger believes donors will be willing to contribute to the cause.

“Many people of this county have expressed desire to have adequate facilities for animals,” Swanger said. A new animal shelter in Transylvania County recently leveraged $300,000 in private donations, but the cost to the county was still more than $1 million.

Swanger said the shelter won’t happen any time soon, but will be pursued at a “measured pace.”

Space is the biggest complaint for the animal shelter.

Animals are euthanized at the shelter on a twice-a-week schedule. Hazzard tries to avoid putting down dogs and cats that have a chance at adoption. Most that get euthanized are old, sick, injured, aggressive, or have demeanors that make them unlikely candidates for pets.

“Many of these are unadoptable for whatever reason,” Hammett said.

But at times the shelter gets so full Hazzard has to pick animals to put down simply to make room. They are theoretically adoptable, but the shelter can’t hang on to them.

“So one of us has to go back there and play God,” Hazzard said.

Overcrowding has occasionally prompted Hazzard to turn away voluntary surrenders — pets being brought in by people who can no longer care for them for whatever reason.

Animals in the shelter aren’t just strays, lost pets or no-longer-wanted animals. Animal control officers are routinely called by police and deputies to come get animals when the pet’s owner has died and there’s no one to take it. They also retrieve pets from homes where the owner has been arrested, or pets found at crime scenes.

“I’ve climbed over bodies to get to a dog,” Hazzard said.

The animal control officers are also called in when deputies do an eviction.

“If no one is there and they are padlocking the door, we have to go get any pets out,” Hazzard said.

Despite the periodic space crunch, the number of animals coming in to the shelter has declined dramatically over the past two to three years — from around 4,200 in 2011 to only 2,700 this year.

Hazzard believes the decline is not just an anomaly, but is likely to stay down. The reason: aggressive spay-neuter campaigns by local animal welfare groups, including monthly low-cost spay-neuter clinics.

Meanwhile, the population of feral cats has taken a huge hit thanks to a “trap-spay-release” initiative, also undertaken by local animal welfare groups. The reduction in feral cat colonies has alleviated volume at the shelter.

“There would be days when we would have to put down 20 to 30 feral kittens. We just aren’t getting those in near the numbers that we did,” Hammett said.

The 35-percent decline in animals coming in to the shelter looks better on paper than it really is, however. Most of the drop is in the cat department — particularly feral cats, which weren’t candidates for adoption anyway. They were usually put down fairly soon upon intake, and not kept around in hopes of finding an owner.

On top of fewer animals coming in to the shelter in the first place, more are being saved now than in the past thanks to the proactive work of Sarge’s Animal Rescue group.

“Volunteers from Sarge’s are in here every single day,” Hazzard said.

They even have their own desk space. They photograph animals and post them online to spark adoptions. The group also helps with the cost of adoptions — picking up part of the tab for animals to be vaccinated and spayed or neutered, which is mandatory before people can take pets home from the shelter.

Sarge’s also has a foster pet program, where a robust network of volunteers harbor dogs and cats in their own homes until a permanent owner is found.

On a recent weekday, the shelter was not even half full. But that’s not always the case. Animal adoptions are always up around Christmas, so more dogs and cats had been moving out the door than normal this month. Numbers are also higher at certain times of year when litters are being born.

Hammett said even though the shelter isn’t at capacity all the time, the hope would be to double the space when building a new one.

“We would want to look down the road another 20 to 30 years. We don’t want to build an animal shelter just for the needs of today,” Hammett said.

There are other deficits with the current animal shelter. It has nowhere to house large animals. Malnourished horses are sometimes confiscated, and must be housed for a fee at private farms.

The shelter also lacks an adequate quarantine area, potentially exposing healthy animals to sick ones, or forcing animals to be euthanized prematurely.

The all-concrete walls and floor pose another issue.

“The sound in there is deafening,” Hazzard said. “Sometimes we lose people coming in to adopt because the sound of the barking dogs is so loud they can’t stand it. Little kids will be screaming that it is hurting their ears.”

The dogs get stressed by the cacophony of barking as well.

“The little guys don’t know the big guys can’t get to them and injure them,” Hazzard said.

Aside from needing more space, Hammett and Hazzard said the floor layout of the existing shelter doesn’t function efficiently, particular in the front-of-house.

A cramped lobby at the front of the shelter is a catch-all for everyone and everything coming and going from the shelter.

On a typical day, the entry foyer is a bustling place. People looking for a missing pet are filling out paperwork with the animal’s description. Those adopting a pet are cradling their new companions while paying their fees. Animal rescue volunteers are coming and going.

As the main egress and ingress to the shelter, animal control officers bringing in stray animals are trying to squeeze through the commotion to get back to the kennels.

“The animals and the public are coming in and out the same door,” Hammett said.

There’s no separate office space for employees, so their desks are tucked against walls in the cramped entry way, not only adding to the crowding, but forcing them to handle the steady stream of phone calls from the public within earshot of all.

“It is totally unprofessional,” Hazzard said.

A nonprofit called Friends of the Haywood County Animal Shelter has been created and will serve as a vehicle for fundraising and rallying community support.

The next step is to create a rough sketch of what the animal shelter would look like to make fundraising more tangible.

“If we had a schematic drawing, then you can start on working donations. People need to be able to see it,” Commissioner Kevin Ensley said.

With a site not yet selected, however, drawings would be conceptual only.

The current animal shelter is in the Hazelwood area of Waynesville and is not a candidate for expansion, according to commissioners. Where a new shelter might be located has not been discussed.