Legal or not? Cherokee council votes themselves a pay raise, public protests 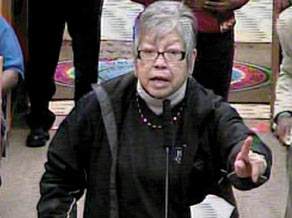 There wasn’t much discussion in the chamber Oct. 14 when Cherokee Tribal Council passed its budget for 2014-15. But as news of backpay and a $10,000 raise for council members spread through the reservation, things heated up.

“You’ve opened a door by doing it, and I’m going to question and I’m going to stay on top of this and I’m going to refresh our memories and I’m going to keep the public refreshed,” Teresa McCoy, councilmember from Big Cove, told council during its Oct. 21 meeting. “They’re going to hear about it until they get sick of hearing what council’s doing. You need to go back and read your oath of office.”

The budget, which became effective immediately and goes through Sept. 30, 2015, had passed during an Oct. 14 budget meeting labeled a budget hearing. McCoy, who along with Snowbird representative Brandon Jones was absent from the meeting, said the fact that the meeting was deemed a “budget hearing” indicated to her that no vote would be taken.

“It was certainly not anything that was planned,” Chairwoman Terri Henry explained to council of the budget vote. “Essentially what happened was the budgets were finished and council wanted to have the resolution, so we had the budget and went into session and passed the budget.”

Of the 10 council members present during the budget hearing, nine voted to pass both the tribal council budget in particular and the budget as a whole. Bo Crowe, representative from Wolfetown, was the only dissenting vote, but no discussion occurred.

By the time the Oct. 21 meeting rolled around, word had apparently gotten around to the community that the tribal council budget for 2014-15 would not only include raises of about $10,000 for each member but also backpay for raises that supposedly should have been given previously.

The outcry from the public is that it’s illegal for council to give themselves any pay increase at all this year, according to the Charter and Governing Document of the EBCI.

“The members of the Tribal Council shall receive such compensation as shall be appropriated by the Tribal Council, with no pay raise to take effect until the next council is seated,” Section 7 of the document reads.

The next tribal council won’t be seated until the fall of 2015.

According to Principal Chief Michell Hicks, though, the increase isn’t a pay raise. It’s a salary adjustment and long due to make up for incremental pay raises that should have been given all along. In the Oct. 21 council meeting, Hicks pointed to an ordinance passed in 2004 that stated that tribal council members should receive incremental raises of the same size given to tribal employees. Council members did receive a $10,000 pay increase in 2007 but had not received any incremental raises since then.

“In this situation, this is an adjustment for prior periods, so it should have already been enacted,” Hicks told council. “It’s not a pay raise, it’s not a pay increase, but it is addressing the enactment of an ordinance that’s already on the books.”

Blankenship explained that tribal employees receive annual raises of 1 to 4 percent based on performance. To arrive at the backpay amount, he used the average percentage of these merit raises for years 2007-2013 to come up with an overall average percentage, 2 percent. Backpay is calculated based on 2 percent of the salary for each year.

The public isn’t buying that explanation.

“When you go from 70 to 80 [thousand], that’s a raise,” Wolftown resident Becky Walker told council Oct. 21. “You can call it an adjustment if you want to, but that’s a raise.”

Several of the council members agree with Walker. Bo Crowe provided the sole dissenting vote when the budget was initially passed, but McCoy and Brandon Jones, who were absent from the vote, also staunchly oppose the increases.

Though Albert Rose, a first-term council member, originally voted for the budget, he has since staked out a different position and even entered an official protest of the raises, along with McCoy.

“I apologize to the people, to the community,” Rose said at the Nov. 6 meeting as council reached his and McCoy’s protests on the agenda. “If I’d known then what I know now, I couldn’t support it. I won’t support it.”

But neither of the protests was ever read.

According to Cherokee meeting rules, council members must vote on whether or not to hear a protest. The cover letters of McCoy’s and Rose’s protests were read, but council voted 7-5 not to hear the protests themselves. McCoy, Rose, Jones, Bo Crowe and Henry voted to hear them, while Bill Taylor, Perry Shell, Gene Crowe Jr., Tommye Saunooke, Adam Wachacha, David Wolfe and Alan “B” Ensley voted not to.

An already tense audience erupted as the votes were taken.

“So you’re not even going to listen to the people? You’re just going to shut us out?” one audience member shouted after members voted to deny McCoy’s protest.

“The protest has been denied,” Henry replied, before moving onto the next item — Rose’s protest.

“I want each councilmember that just voted to deny two protests to tell us how much they received in backpay,” McCoy said.

“The issues have been voted on,” Henry said. “The council — the vote was to deny the protest, so we’re going to move on.”

That declaration elicited an audible response from the audience, and as Henry continued to bang her gavel to move on to Item 8, tribal member Jody Taylor came up to the mic to say her piece, speaking over the pounding gavel.

“How about the tribal employees?” Taylor asked. “They don’t get a penny.”

“It is only fair that we can speak on what our positions are from the community,” said Peggy Hill when Taylor stepped down, Henry continuing to bang her gavel and call for council to proceed with Item 8.

At that point, McCoy cited legislation allowing her to cede time that she, as a councilmember, would have to speak. Rose did likewise.

“I want [Assistant Attorney General] Hannah [Smith] up here,” said Solomon “Slick” Saunooke. “I have a legal question for Hannah.”

“In my opinion it is not in violation of the charter,” Smith said. “I can talk more about that analysis if you’d like for me to.”

Things cooled down a bit after that exchange, and for a while the meeting moved according to the agenda.

But the issue kept resurfacing.

“Madam chair, these are heated discussions,” McCoy told Henry as an impassioned discussion about tribal enrollment segued, yet again, into the council raises issue. “They’ve been boiling for some time and we need to have them.”

An issue with legs

The vote is done and the raises are being dispersed, but the discussion is far from over. Council members who disagreed with the raises are still fighting to keep the extra money out of their bank accounts — McCoy said she donated hers to various tribal organizations, as it had been paid out without her consent — and angry tribal members are expressing their rage online.

“If you didn’t get to attend or watch Tribal Council today ... WOW!!! What a Sickening display of greed, cover-up and corruption!” reads the beginning of a Nov. 6 post on a page called Cherokee Rants & Raves. The post garnered 41 comments and 73 likes as of Dec. 8.

Henry would not comment for this story, and Hicks declined an interview, instead submitting an emailed statement that, aside from a description of the Cherokee budget process, read only, “The Tribal Council has authority over budgetary legislation and has determined along with legal counsel that all their actions were within their responsibility as the legislative body of the tribe.”

McCoy said she’s not done trying to get some more detailed information on exactly what money was paid to whom. Though Blankenship gave out the total dollar amount of the raises and the salaries of tribal council members, he did not say how much backpay each individual council member got, saying that legally such information can only be made public by authorization of the chief. He also did not say how much the chief and vice chief received, if any, or detail where the money for the raises came from, as the raises were not part of the budget Chief Hicks originally proposed in July.

“I have people in my community that can’t pay their power bills,” Jones said. “There’s a lot of problems that we’ve gotta fix before I could ever justify a pay increase.”