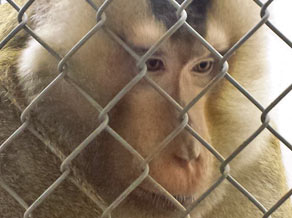 An Old World pigtail macaque monkey taken away from its owner in Waynesville now has a new home at a primate preserve in Kentucky.

The monkey — “Opey” — was the indoor pet of a Waynesville woman, who’d kept him in a cage in her home for almost seven years. After being picked up by animal control officers in November, Opey stayed at the Haywood County Animal Shelter for three weeks until a permanent home was found.

Opey was spoiled during his stay at the shelter. The animal control officers miss him a little now that he’s gone, though he was more work than the usual shelter resident.

“We made it peanut butter and jelly sandwiches, but he liked his crusts cut off or he wouldn’t eat it. And we fed him apples, but it wanted the skin off its apple,” said Jean Hazzard, director of Haywood Animal Control. “We go all out for our animals in Haywood County.”

Opey was confiscated after animal control officers were tipped off. Technically, it’s legal to own a macaque monkey.

“But not in our county,” said Hazzard.

Opey looked innocent enough — “When you handed him his sandwich he’d sit there like a little child and he’d eat it,” Hazzard said — but primates are strong and will bite.

“It’s hard because you want to go in there and hold his little hand and take him for a walk. But you just can’t. It’s too big a risk. It could cost you your life,” Hazzard said.

Opey wasn’t a small monkey either. He weighed 30 pounds, and was nearly four feet when he stood on his back legs. His old owner had kept him in a cage inside her home.

Macaques can also carry diseases, so the officers wore gloves and a mask anytime they entered the quarantine room to bring Opey his food — three square meals a day.

Based on the average lifespan of his species in captivity, Opey should live another 20 years at the primate preserve.