Back to the future: Historic movie marquee crowns Waynesville’s Main Street once more 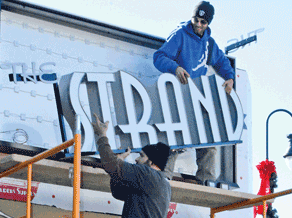 An iconic symbol of downtown Waynesville’s glory days is back.

A quintessential movie marquee for The Strand theater was hoisted into place last Friday, reclaiming its rightful spot above the benches and lampposts of Main Street’s quaint-but-classy streetscape.

The marquee is a throwback to the 1940s movie houses that were a signature of any downtown worth its salt in the day. The historic design has a small-town feel, but is Broadway enough that Lauren Bacall wouldn’t be ashamed to walk the red carpet beneath it.

“It’s retro without being hipster,” said Lorraine Conard, owner of The Strand at 38 Main, as she studied the sign up close one last time before it ascended the scaffolding last week.

“It says ‘excitement.’ Nostalgic. A little bit jazzy. Classically-classy. But what’s the finish?” Conard said, equating the impromptu marquee analysis to a fine wine tasting. “With the finish of Billy Holiday…singing ‘Chestnuts Roasting on an Open Fire.’”

Stylistically, the marquee is perfect. Symbolically, it’s even better, a testament that downtown Waynesville is a vibrant place to be. Few small towns can boast a downtown theater venue, and the marquee makes a proud proclamation.

“This is the interface, the connection with the community at large. This is how we come together and invite people in a way nothing else does,” Conard said.

The marquee raising last week was a long-awaited moment for the downtown Waynesville community, which eagerly welcomed the reopening of The Strand last year after a 35-year absence.

Downtown Waynesville once had two full-size movie theaters in the era of the silver screen, before the double death knell of television and malls took their toll on downtown movie houses.

Lorraine and her husband, Rodney, bought The Strand building out of foreclosure in 2011 and spent two years gutting and renovating it. The boutique theater and music venue made its debut last summer, about the same time the couple’s first baby was born.

But the iconic marquee jutting over Main Street remained a blank slab.

At the time, the town’s sign regulations didn’t allow signs of that scale. While the original wooden housing for the marquee was still there, it needed a new face and lettering. That would require a sign permit, and the town’s sign ordinance prohibited signs that large in the downtown district.

It posed a conundrum. The sign ordinance was intended to preserve downtown’s character by keeping out the visual clutter of over-sized signs. But town planners realized The Strand was a special case.

While huge McDonald’s arches might be out of place, a well-done theater marquee would actually contribute to the historic appearance of downtown, not detract from it.

So the town crafted an exemption to its sign ordinance that would allow “marquee-style signs” in historic districts — as long as the historic preservation commission approved.

While the exemption didn’t name names, it was clearly tailored for the return of the old movie marquee at The Strand.

But the biggest hurdle was yet to come: the cost.

“It is incredibly expensive and we are basically trying to bootstrap this place into existence,” Conard said.

The marquee would take $20,000 to design, fabricate and put in. It was simply out-of-reach — and frankly, still is.

The Conards have launched a community fundraising campaign to hopefully off-set the expense of the marquee. Initially, they planned to raise the money first. But ultimately decided to do it the other way around.

“There’s been an enormous outpouring of verbal support from the community and because of that we decided we could take the leap of faith to get the marquee fabricated,” Conard said.

Now, the Conards hope the community will step up and contribute to the cause. Donors get a nice door prize in return. You can pick a “stocking stuffer” package in exchange for a donation — with various combos of movie tickets, concert tickets and concessions.

The promotional packages can be purchased online at www.38main.com.

The Strand at 38 Main has a robust lineup of movies, from new releases to classics, kid’s movies to thrillers, documentaries to comedies, indy films to blockbusters. The movie title changes weekly, with weekend matinees along with nightly showings.

The boutique theater is also home to a weekly concert series. Billed as an intimate listening venue, The Strand serves as a community space to showcase musicians and liven up Waynesville’s nightlife scene.

Last but not least, The Strand shows free cartoons for kids every Saturday from 11 a.m. to 1 p.m.