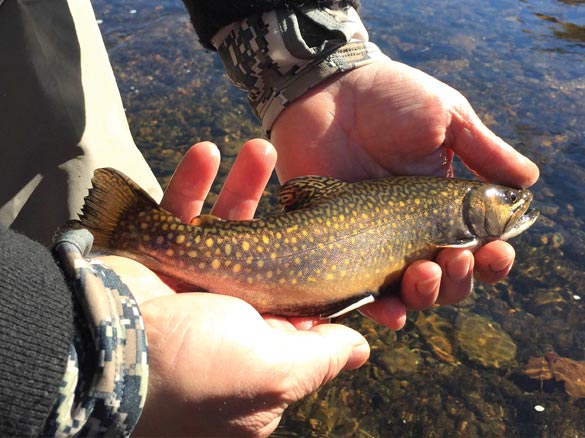 Word on the river is that more and more people are getting into fly fishing, spurring a push for fly-focused tourism and marketing – and the opening of a pair of new fly shops.

“‘A River Runs Through It’ with Brad Pitt brought a lot of attention to the sport,” said Bob Bennett, who co-owns Tuckaseegee Fly Shop in Bryson City with Dale Collins. “Just in the recent five years or so, things have just really taken off, and I think part of it is bringing awareness to access. This is not a sport that you have to go to Montana for, or Alaska. You can bring it right here in Western North Carolina in the thousands of miles of stream we have.”

Americans are catching on. Between 2002 and 2012, for example, fly fishing license sales in North Carolina rose by 544,000, a 175 percent increase. During the same time period, fly-related retail sales in the South rose from 16.3 percent of the national total to 23.7 percent, according to annual reports from the American Fly Fishing Trade Organization. And the dollar value of those sales more than doubled from $83 million to $177.3 million. Nationwide, retail spending on fly-fishing rose from $686 million to $748.6 million.

Describing business as “consistent and steady” since the store first opened in August, Bennett is confident that there’s plenty of demand to support the new shop on the block. The Depot Street location is a short drive from Great Smoky Mountains National Park, Nolan Creek and Nantahala Gorge. Deep Creek is just down the road, and the Tuckaseegee River is almost literally a stone’s throw away.

“We’re surrounded by a lot of water,” Bennett said.

Those surroundings have gotten the attention of tourism organizations like the Swain County and Bryson City chambers of commerce and the Swain County Tourism Development Authority. There’s now a fly fishing map and brochure for angling in Swain County and an entire site online dedicated to guiding fishermen to the best experience possible. And Bryson City is on its way to having itself declared a Mountain Heritage Trout Water City by the N.C. Legislature.

“The support was really easy to see from the chamber of commerce here,” Bennett said. “They’re obviously promoting fly fishing in Bryson City and Swain County, and there’s already a good guide base of independent guides. There just wasn’t a brick and mortar.”

Bryson City has a whole laundry list of guide services, as well as some bait and tackle shops for spinrod fishing. But there wasn’t really a comprehensive fly shop to tie it all together. Bennett hopes the store will be a tool to recruit people to the sport.

“One of the big things we’re trying to do is we don’t want to price people out of the sport,” Bennett said. “We’ve got low-end gear all the way up to the highest-end gear in the industry.”

The shop will also add its guide services to the mix of those already available in Bryson City, with the goal being to teach people – especially young people – how to fish and how to love it.

Jason van Dyke, a guide with Hunter Banks Company, can relate to the hooked for life syndrome.

“I actually have a picture of me in diapers with a fish on,” van Dyke said.

A former pressman, he’s been a guide with Hunter Banks for the past eight years, mostly at their Asheville store. But one-and-a-half years ago the store opened a second location in Waynesville. And in August, the shop moved to a new location on Main Street.

“We’ve definitely been very well received by the community,” said Aaron Motley, manager of the Waynesville store. “People are giving us good feedback.”

Waynesville’s had a fly shop for the last decade or so, Motley said, but not a business with consistent ownership or hours. Right now, Hunter Banks is the only game in town as far as fly fishing is concerned — though Waynesville Bait and Tackle still serves bait anglers.

“We’re blessed with so much public land here. That’s one thing,” Motley said to explain why Waynesville’s a great area for fly fishing. “Public land and streams everywhere that house brook, brown and rainbow trout.”

Those streams — and the art of catching fish from them — have long been a part of mountain heritage, added Motley, so it’s fitting that the same towns where people used to spend long winters crafting flies from whatever duck feathers, deer hair or spare threads they could find should have a shop dedicated to selling the tools of the modern-day sport.

“My job is basically if someone comes in and wants to go fish someplace in Western North Carolina having no knowledge, I can get them up to speed enough to catch fish on their own,” Motley said.

That’s a mission that both the Waynesville and the Bryson City stores share — getting more people hooked on fly-fishing.

“We love seeing new people get into the sport,” Bennett said. “When someone walks in the shop and they have no clue about fly fishing, I love having that opportunity to introduce them.”

Though Bennett agrees that retired people make up the biggest sector of the fly fishing community, he’s seen some definite interest from a younger set. In both social media interaction and in-store sales, the shop’s seen the biggest response from people ages 30 to 34, Bennett said.

Bennett and Motely both hope to see those younger people continue to grow the sport even more.

“Water’s a therapeutic thing, and I think people like fishing, that it’s kind of methodical and slows the pace of life down,” Motley said. “It’s enjoyable to get out on the water.”

Especially with a fly rod in hand, because if catching a fish on the fly is your goal, you’re probably headed somewhere pretty great, anyway.