A look at three self stories

After reading three autobiographies in less than 10 days, I emerged from the encounter feeling much like a lover who has finally encountered the full physicality of his beloved: I’m thankful for the romp but find myself a little disillusioned, a little disappointed with some parts of the romance.

J.R. Moehringer’s The Tender Bar (ISBN 1-4013-0064-2, $24.95) was written by a man growing up without a father and seeks the company of men at a nearby bar called Dickens. This book was the sweetest of the three books and will attract any reader who loves good writing and good storytelling. Even more, it will draw those readers who have themselves, at one desperate point or another in their lives, found a home, a haven, a church in a beery, smoky pub.

Moehringer, who grew up with a father and lived much of his life with a crew of eccentric relatives, gives us remarkable insights not only into the night-by-night life of a tavern and the dramas played out there, but also into a part of the male soul — that aspect of manhood our society often deliberately overlooks. In the Dickens bar, a young man found the comfort of other men, discovered that maleness so often missed by those who grow up without fathers, who come to manhood without the maps that might guide them through the wilderness of what it means to be male nowadays. Though Moehringer draws all his characters as skillfully as the Dickens’ bartenders draw their brews, one of my favorite characters is Uncle Charlie, Moehringer’s uncle who also works at Dickens and talks like Humphrey Bogart in Casablanca. Here is Uncle Charlie’s reaction to one of Moehringer’s first morning-after bouts:

In the morning I woke from a nightmare in which Marines were storming Grandpa’s house and using the chevrons from their sleeves to retape the bicentennial sofa. I took a long hot shower and sat on the stoop with a cup of black coffee. Uncle Charlie came outside and glared at me. I braced myself, but he saw my bloodshot eyes and must have concluded that I’d suffered enough. He shook his head and looked at the treetops.

Julie & Julia: 365 Days, 524 Recipes, 1 Tiny Apartment Kitchen (ISBN 0-316-10969-X, $25.95) tells the story of Julie Powell, who approaches 30 and feels that her life had fallen into a horrendous rut. She takes her mother’s copy of Julia Child’s Mastering the Art of French Cooking with her back to New York, where she vows to cook every recipe in the book in the space of a year. Aided by her long-suffering husband, Eric, and posting the results of her quest every day or so on a blog, Julie plunges into a world of cookery utterly foreign to her — a Franco cosmos of sauces and boned duck, of aspic and gelid eggs, of chicken and beans awash in rivers of butter and cream. 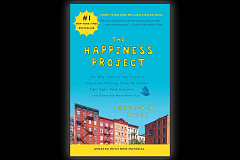 The first half of Julie & Julia offers superb comedy and personal insights. As Julie begins her cooking marathon, we encounter her friends and family. Many times I laughed aloud as I read, even at some of her rougher forms of humor. Here is her account of her mother’s reaction to the apartment she and Eric rented in Long Island City:

I also have a long history of trying to kill my mother by moving into highly unfashionable, and often demonstrably unhealthy, locales. It’s been years, and yet she still talks about my first New England studio like it was the “hole” in a Khmer Rouge prison. And of course there is no forgetting the day she saw the one-hundred-year-old crumbling adobe building in the Middle-Of-Nowhere, New Mexico, that we rented the first summer we were married. She stood at the doorway, the beam of her flashlight piercing the gloom and skittering across the floor as she searched for mouse droppings or the dead bodies of larger creatures, maybe humans. Tears welled in her wide eyes. As long as I live, I will never forget the sheer horror in my mother’s voice when she whispered, “Julie, seriously — you’re going to die here.”

The first half of Julie & Julia offered high amusement; the second half offered the temptation to hurl the book through the nearest open window. Especially frustrating are Julie’s frequent outbursts of (who put a gun to her head to write this book?), her increasingly witless profanity, and her cowardice in failing to speak up when one of her friends makes an enormous mistake by abandoning her husband for a punk rocker whom she’s met only online. The author begins to grate not only a lemon peel but also on my nerves. Near the end of the book, weary of her self-pity and her anxiety, I began skimming through the fatter paragraphs and giving short shrift to her whiny descriptions of her culinary struggles.

Hortense Calisher’s Tattoo for a Slave (ISBN 0-15-693293-1, $14) offered no entertainment or instruction whatsoever except for a sort of shocked bemusement that a publisher could justify the waste of paper on such tripe. Only Calisher’s reputation as a writer of fine stories — she was married and 29 years old when World War II broke out in Europe — could explain why this book ever saw print. Rarely have I read writing so odd, so far from normal usage or syntax. About 30 pages into the book, I gave up trying to figure out where we were in time or what precisely was being said. Thirty more pages, and I gave up the book entirely. Here, selected at random, is a passage from page 36:

When women whisper, putting their hands over their mouths like that, I used to be shamed for us. Never see the men at that. Do it under their hats, maybe, those swoopy-brimmed ones they can then knock back, denying any undercover exchange. Or hide it in the wallet, where the denominations, however dealt, are anonymous. But living on, one comes to acknowledge, if not savor, that whether from male or female, black or white, whether behind borders closed or open, or stewing in those jars of misery that will be the present — or next war’s orphanages — all the secrets will be the same.

What in the name of Ghenna does she intend by such prose? The New York Times reported that “... its meaning sneaks up from behind and stuns you by degrees.” Actually, I think that’s a fair assessment. Tattoo for a Slave did stun me by degrees, and its meaning is clear: if you’re past 90 years old and you want to publish a book, you’d best come up with an editor who can give you directions to the nearest trash can.