When the political season cranks up, as it’s about to, this business gets a lot more fun.

I’m one of those who believe newspapers are the best place to learn about candidates’ positions. We, along with the other print journalists in this region and those across the country, work hard to make these people who want your votes stake out their positions on the important issues. And we’ll try to provide some perspective and background, to put the issue into some kind of context. Most of us view it as a challenge each election season to prove newspapers provide better, more in-depth coverage of candidates that television and even the Internet.

Unfortunately for those of us in the newspaper business — and ultimately, this portends a dangerous future for this country — too few people spend much time actually learning about the issues. Politicians certainly know this, and that’s why they spend a huge percentage of their ad money producing television commercials that slam their opponent or ones that merely make themselves look good. In that environment, they can control the message, the appearance and the words.

It’s not a lot better on most of what are considered television news programs. Too often, at least on the national cable channels, the reporters are biased and therefore don’t make any attempt at fairness. It’s just difficult to present the nuances of how people feel in a 30-second newsclip.

What fun is there in politics, you might be asking? The truth is you have to know what you’re looking for to get the greatest pleasure — and meaning — from the events in a campaign. Just like music, great literature, fine wine or good food, the more you know, the more you appreciate the nuances.

Of course there is the big race that’s getting a lot of early publicity: Rep. Charles Taylor, R-Brevard, the eight-term incumbent from Brevard, and his big-name challenger Health Shuler, the Democrat from Bryson City who played football at Tennessee and now lives in Waynesville. They’ll almost certainly be squaring off in November’s general election.

Shuler made a relatively predictable — and what turned out to be savvy — move a few weeks ago. The U.S. Forest Service, as part of President Bush’s 2007 budget proposal, announced a plan to sell about 300,000 acres of forest land, about 6,700 of which is in the Pisgah and Nantahala national forests. Shuler almost immediately came out against the sale, citing its harm to sportsmen and the tourism industry. He challenged Taylor to join him in opposition.

When Shuler took his stand so quickly, Taylor was put in a tough position, for several reasons. One, he would have to challenge the president, the leader of his own party. Two, responding immediately to Shuler could give the appearance that he was being put on the defensive by an upshot challenger. And three, Taylor probably wanted time to study the issue and gauge support among constituents here in WNC and leaders in Washington before he spoke out. He had more to lose than Shuler.

This week Taylor made it clear he does not support the proposed sale. As chairman of the budget committee who would have to OK the sale, Taylor’s opposition means the proposal should be dead in the water. So as it is, both the major candidates in this race hold the same position on this important issue.

Shuler got a lot of free publicity via news stories, which is probably just what he wanted. Taylor, however, also got plenty of coverage and in the end may have alerted voters to at least one strategy in his campaign plan. Shortly after Shuler held a press conference in Macon County to challenge the incumbent on this issue, Taylor’s office issued this statement: “Since Mr. Shuler has amassed fortune cutting up forests in East Tennessee to build expensive housing developments, his sudden opposition to plans to manager our national forests seems very contrary to what he is actually doing.”

The great irony in this statement is that it is very similar to charges Taylor’s opponents have leveled at him over the years. He’s been labeled a millionaire, uncaring businessman and landowner content to let our public lands be sold to the highest bidder. Now he’s turning those charges against his young opponent.

Shuler’s got a tremendous uphill fight, but without a national Republican to lead the ticket he’s got an outside shot. His goal, as it is for every challenger, is to define himself and not let his opponent paint the picture. But even then, it’s going to be tough. One liberal politico told me last week he’d rather have an old, controversial and conservative Republican in Washington funneling big money to the district than a promising, smart Democrat who would have to ask directions to the congressional cloak room.

When we published stories last week about this forest sale proposal and how Taylor and Shuler stood on the issue, we totally ignored the two men who have decided to challenge these big-name politicians in the May primaries.

Armor, a Republican from Highlands who will challenge Taylor in the May primary, contacted us right after the story came out. In so many words (see letter on page 13) he told us there was not a Taylor-Shuler race. Technically he’s right. In May, Taylor has to get past Armor before winning the opportunity to be on the November ballot. Shuler must outpoll Morgan.

By that omission, we made an error. Sure, these two lesser known candidates have little chance of winning. What they do have, though, is the ability to help shape the debate. They can bring issues to the table and challenge the better-known and better-financed candidates to take a stand.

Both are against the sale of the forest service land. In the future, we’ll work harder to include these two in our coverage of this race.

Two of the most interesting races pit former state lawmakers against incumbents.

One is for the 47th Senate seat. Here, Democrat Joe Sam Queen of Waynesville, who held the seat from 2002 to 2004, lines up against the man who beat him two years ago, Sen. Keith Presnell of Burnsville in Yancey County.

Queen has been tireless in trying to get back in office. While in Raleigh as a senator he quickly formed alliances with some of the most powerful Democrats in the state and was instrumental in getting Gov. Mike Easley and other influential leaders to visit this region.

Presnell has not made that kind of impact in his first term. In fact, he was largely silent. Many also still remember his tasteless and crude television commercials smearing Queen that aired late in the last campaign.

Queen has a great chance to win this race in one of the state’s most gerrymandered Senate districts.

Haire holds several leadership positions for the Democrats and has served three terms. This is also a solidly Democratic district. However, Carpenter served in the House back when Haywood and Jackson were in a two-seat district. In fact, she and Haire served together for one term from 1999 to 2001 before the redistricting.

Carpenter also has pedigree, being the daughter-in-law of long-time state Sen. Bob Carpenter of Franklin, who served in the Senate until 2004.

I would think Haire has all the advantages in this race, but Carpenter is personable and will work hard. It will be interesting to see if her candidacy picks up any steam as we near Election Day in November.

Of course there are loads of local races that will directly impact people across the region. County commissioners are among the most influential leaders, deciding everything from land-use planning, tax rates, how much money goes to schools, supporting greenways and parks, and investing in health and human services. The men and women who sit on the county boards will have more direct impact on our lives than just about any politician at any level.

If you don’t think politics is fun and important, then I guess you’ll just have to find your own entertainment. Me, I can’t wait for the mudslinging, the posturing and the pointing of fingers. Oh yeah, and the important issues too. 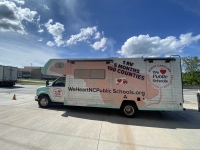