Passing on the song of Appalachia: JAM teaches music, tradition and a sense of place 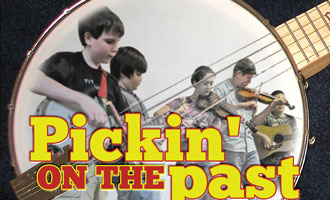 At the front of the room, banjos and fiddles plow through an Appalachian repertoire. Fingers dance across strings, conjuring the history and tradition that have seeped out of the region’s hills for generations.

“Trying to get’em to play together on the same beat at the beginning is kind of like herding cats,” laughed instructor Robby Robertson. “But by the end they get it together.”

Across the audience, parents capture the moment with cell phone cameras. The young musicians focus on their instruments and ready themselves for another song.

Off to the side, other young musicians watch their friends play. They cradle guitars and banjos and wear fiddle cases like backpacks as the group up front finishes up with “Good Old Mountain Dew.”

These students have gathered in Haywood Community College’s creative arts building to celebrate another year of JAM, or the Haywood County Junior Appalachian Musicians program. They’re performing for family and friends, demonstrating the skills they’ve learned in the after-school program.

Roland is in sixth grade and has been involved with the JAM program for three years now. He’s been learning to pick the banjo.

“I have talent in music, so when I play a new instrument it gets me excited,” Roland said.

Fellow musician Benjamin Carpenter, 13, has also been with the program for three years. The seventh-grader plays the guitar, but he’d like to explore other instruments as well.

“I want to do the mandolin if they make a class for it,” Carpenter said.

Standing at the back of the room, Bill Roland watches his grandson and the other musicians perform. He wears a smile sanctioned by the sound.

“He plays it when he comes to my house,” the old man said, nodding toward his grandson and the banjo. “He loves it.”

This is the payoff for Sally Mackert, manager of Haywood’s JAM program. She likes to see students jazzed about mountain music and culture.

“You can immediately identify the kids that just get turned on and really excited,” Mackert said.

The Junior Appalachian Musicians program first began in 2000 in Alleghany County. There are now more than two dozen programs across North Carolina, South Carolina and Virginia.

Haywood County’s JAM, an offering from the Haywood County Arts Council, was among the first to form. It began in 2001 and caters to students in fourth through eighth grade.

“Me and my brother and Trina Royar started it all,” recalled Trevor Stuart.

Stuart is still involved with the program. He teaches fiddle, while his twin brother, Travis, teaches banjo.

“The history of the program is really couched in these two instructors who have been there since the beginning,” explained Mackart. “They’ve really been the backbone of the program.”

In addition to working with JAM, the brothers are also performers. They take the sounds of Appalachia on the road and across the ocean.

“They say people in the British Isles are absolutely smitten with Appalachian music,” Mackart said.

The brothers were drawn to JAM because of the program’s mission to cultivate Appalachian culture.

“I think it’s good to keep the old music alive,” said Trevor Stuart. “It’s just a good way to pass on the tradition.”

There was no JAM program when the Stuart brothers were young. The twins were taught just as generations of past Appalachian musicians were taught.

“We started playing when we were young, learning from folks in the community,” explained Travis Stuart. “It’s social music; people would get together and dance.”

The brothers didn’t learn to play through formal training. They learned to play the same way they’re teaching their students in JAM to play: by ear.

“We try to make it fun, we don’t do any kind of classical training, we just do ear training,” explained Travis. “It’s the way it was passed on. There’s just no other way to learn. We try to get’em to listen.”

This aspect of the JAM program, playing by ear, is key.

“Our instructors pride themselves on teaching that way,” said Mackert. “They’re big believers in that tradition.”

Learning to play by ear not only continues a tradition but also allows for a less formal environment. Kids needn’t be steeped in theory. They are not required to learn how to read music. They are free to listen, and enjoy.

“That’s kind of important,” said Dusk Weaver, manager of Jackson County’s three-year-old JAM program. “You know, you pass on your musical enthusiasm when you teach kids, and it’s not as formal as learning to read music.”

That enjoyment is paramount to the program. It is essential to the music itself.

“It’s pretty simple and raw music,” said Travis Stuart. “A lot of people learn it and the first thing they want to do is dance.”

Keegan Luckey-Smith has enjoyed JAM for years. First as a student, now as an instructor.

“I had a great time over at JAM and learned so much,” said Luckey-Smith. “I really like to pass on the stuff I learned.”

The banjo player is deeply rooted in JAM. He fully appreciates its mission.

“It’s a connection to the area. It’s kind of like taking a history class,” Luckey-Smith said. “That’s one of the things that really drew me to this kind of music. I really love history.”

The musician’s experience in JAM, as well as his love of history, is currently shaping his future. Lucky-Smith will soon venture to East Tennessee State University for a total immersion into his passion.

“It’s the only one in the country that has a bachelor’s of arts in bluegrass, old time and country music,” he said, adding that he’s not yet sure what path he’ll pursue with the degree. “I’m not sure right now, but I know that’s the kind of thing I want to be involved in.”

Lucky-Smith also gives a nod toward JAM when discussing his current endeavors. He is part of a local band, Productive Paranoia, which incubated in the JAM program.

“All the members have been in JAM at one point or another,” Luckey-Smith said. “It definitely helped the sparking of it.”

Productive Paranoia plays throughout the local area, in a way continuing JAM’s mission and preaching the gospel of Appalachian music. It’s a message that’s finding a receptive congregation.

According to Luckey-Smith, the group’s fan base cuts across generational boundaries. It’s more and more common to find young musicians with an interest in old-time music.

“We meet a lot of younger bands that are interested in doing the same thing we’re doing,” Luckey-Smith said. “I think it’s having a kind of rebirth.”

Haywood’s after-school JAM program wraps along with the academic year. But students can continue their musical journey during the summer with JAM Camp.

It’s a looser affair, learning Appalachian songs blowing in the breeze of summer.

“They can just go outside and sit under a tree and play,” said Mackert.

JAM Camp is held during the second week of July. Students can take lessons on guitar, banjo and fiddle. There is also a string band class and enrichment sessions focusing on mountain dances, songs, stories and traditions — maybe some archery, or kickball.

“We try to keep’em a little energetic,” said Travis. “After lunch we’ll go out and shoot bows and arrows and then come back and maybe have a jam session.”

Like the school-year program, JAM Camp strives to pass along a musical tradition as well as instill an appreciation of Appalachian culture in today’s youth.

This seems to be the core message the JAM program imparts. It allows for connections between the past and future. And, for the Stuart brothers and the rest of the folks plugged into JAM, this is an important mission to carry on.

After a successful run last summer, JAM Camp is being offered again this year. The week-long program offers instruction in guitar, banjo, fiddle and string band. There are also sessions focusing on mountain dances, songs, stories and traditions.

Like the school-year program, JAM Camp is open to students who this fall will be going into the fourth through eighth grades.

From JAM to Productive Paranoia

The members of Productive Paranoia were all involved in Haywood County’s Junior Appalachian Musicians program. Now, they share their sounds with crowds throughout the region.

The band has been together about two years now. In addition to Appalachian music, the young band also incorporates a variety of styles into their sound, including bluegrass and folk.

“We do a mixture,” explained banjo player Keegan Luckey-Smith, “because everyone’s got their own interests in the band. Mine is definitely probably leaning toward Appalachian.”

The banjoist —who is also an instructor with Haywood’s JAM — is the only member of the band to have thus far graduated high school. He is joined by his brother, Connor Luckey-Smith, as well as Madeleine Sheppard, Ean Sheppard and Andreas Kampouris. They play multi-generational audiences and are currently working on material to record an album.

The group drew the name Productive Paranoia from an unlikely well.

Members of the band were in 4-H together. During one 4-H event, the musicians were listening to a business lecture when their future moniker — “productive paranoia” — jumped out at them.

“We were like, ‘That’d be a pretty cool band name,’” Luckey-Smith laughed.