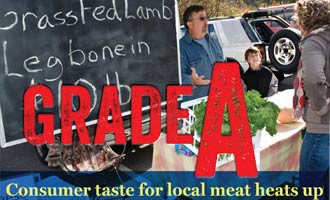 Walking through the market outside the Haywood Arts Regional Theatre on a crisp fall day, McNeil felt good not only about the quality of meat she was buying from a surprisingly large number of meat vendors, but also about what she was doing for the local economy. Buying meat from local farmers helps them keep their land in farms and their families in the pink.

But taste is the biggest benefit, said McNeil, a busy medical salesperson who grew up in Haywood County.

“This is so much better than what you can buy at the supermarket,” McNeil said as she bought chorizo from Keela Worley at the market. “It just tastes fresher, and it’s not full of chemicals.”

Local meat is sizzling. The number of state farmers classified as meat and poultry handlers has increased dramatically since 2002, according to the N.C. Department of Agriculture & Consumer Services. Rich in farmland, Haywood County has some 700 farms and is in the top 20 percent of state beef producers, the department’s statistics indicate.

In the past decade, Western North Carolina livestock producers supplying local markets have increased from a handful to 95 beef producers, 70 pork producers, 36 lamb producers, 26 goat producers and two bison producers, according to the Appalachian Sustainable Agricultural Project, which works to connect farmers and buyers in the region. Serving them are meat processors such as Nantahala Meats and Poultry in Franklin and Wells, Jenkins & Wells in Forest City.

Buying meat from local producers “sets the stage for having a relationship with the farmer who raised it,” said Maggie Cramer, ASAP’s communications manager. Having that relationship, whether for the producers of pork or produce, is what draws McNeil and others shoppers to Haywood’s Historic Farmers Market. That’s true at farmers markets throughout North Carolina, nearly every one of which now has at least one farm selling its own meat. Haywood’s Historic Farmers Market, observing winter hours 9 a.m. to noon through Dec. 14, has about a dozen, Carol James said.

So many Haywood County farmers now want to sell their beef, pork, turkey and trout at the market that administrators created a waiting list, purposely limiting the number of meat vendors so that those who currently sell can make some money, said James, the market’s adviser and past president.

“Prices for meat may be higher here at the market than in the grocery store,” she said. “But our customers are a very savvy bunch. They understand the benefits of buying a quality product.”

Locally raised meat is “surprisingly affordable,” said Jenny McPherson, manager of the Jackson County Farmers Market. The market currently has three meat vendors (beef, pork and poultry). “Sometimes we have ground beef for $5 a pound, which when you consider how much work goes into raising it and that it’s grass-fed, is pretty good.”

Worley Farms raises beef and pork on a farm in the Beaverdam community of Haywood County that’s been in her husband’s family for more than 100 years. Customers like knowing where the meat comes from and who raised it, she said.

Everything about local meat seems to be a family affair. The Worleys got into the meat business because of their son. Living on his family’s 40-acre farm, he started showing pigs in 2001 as part of his 4-H project at Bethel Christian Academy (he won grand champion at the Mountain State Fair that year, his first time out). He showed pigs for years, but “when he quit, we had to figure out what we were going to do with the pigs,” his mother said. “We visited the market, and they encouraged us to sell the meat.”

To her own family’s story she adds those from other families who come to the market every week to buy the pork chops, ribs and filets she has to sell. “They’ll tell you they’ll never buy meat from the supermarket anymore,” Keela Worley said. “We have a lot of repeat customers.”

“I had one man from Florida who had been buying from me all summer,” she said. “He called me at home and said he was heading back to Florida and needed some sausage. So when I was there that Saturday, he came up and bought 15 pounds. He put them in his cooler and said he had room for five more pounds. He said, I’ll see you in April. That’s a good feeling when people come back and tell you how good your product is.”

Heidi Dunkelberg knows how good it is. Co-owner of Carolina Coffee Cup Café in Clyde, she uses sausage from Worley Farms in her sausage biscuits. She also makes sandwiches from ground beef and beef brisket that she gets from Sunburst Beef of Bethel.

“It’s a neat thing that here in our county we have meat that is just wonderful,” Dunkelberg said. “I live in Canton and have raised and killed hogs and know what fresh meat tastes like. It’s just better, and you don’t have all these other ingredients on the label that you can’t pronounce.”

She keeps a chalkboard in her restaurant to let customers know about the local beef, pork, trout, produce and beer that she uses. It’s a way of supporting area businesses — businesses that support her by referring diners her way — and a way of letting local residents know that there are farms growing meat in their county.

“It’s pretty much a win-win situation for everyone,” Dunkelberg said. “Since I’m an independently owned restaurant, I depend on local support. I try to give that to other businesses. I’m dying to do a Reuben sandwich with trout from Sunburst Trout,” a trout hatchery and processor in Waynesville.

Dewey Gidcumb of White Oak Rabbitry and Farm in the White Oak community north of Waynesville sells rabbit, pork and lamb, as well as free-range eggs, spinach and other greens. He was about the only meat vendor when the market started in 2008. He attributes the increase in vendors to people being more concerned about what they eat. He noted research that indicates substantial benefits of grass-fed over grain-fed meat. Grass-fed beef, for instance, tends to be lower in fat and higher in vitamin E and omega-3 fatty acids.

“It’s closer to the way our ancestors ate,” Gidcumb said. But it’s not necessarily the way Haywood County eats. Getting local folks to buy the meat has been a challenge, he said. A lot, if not most, of his business is from people who spend summers here and the rest of the year elsewhere. Nonetheless, people who venture into the market to buy meat tend to be repeat customers, he said.

“People have been so disassociated from the way meat is produced and put in the supermarket that they want to know their growers personally,” Gidcumb said. “They want to shake hands and talk about how we take care of our animals.”

His family got into the meat market by raising chickens for themselves. They like rabbit and lamb too, so that led to other animals on their eight-acre farm. The farm, husbandry and business have grown from there. Now regular shoppers at Haywood’s Historic Farmers Market depend on him being there. That’s true for many of the meat purveyors who sell at local markets.

“When the pork vendor isn’t at the market, people come up to me and ask me where they are,” McPherson said.

Larry Shelton’s business has grown from his involvement with the market as well. His company, Bethel Quail, Eggs & Hatchery, has been selling quail eggs and meat there for two years. He started with 15 quail and then had 200. He was expecting about 400 eggs to hatch any minute, he said on a recent weekend at the market. Six hundred quail is a lot of quail. But the meat and eggs sell well at the market, as well as to the many area restaurants he supplies, he said.

Like other purveyors of locally grown meat, Shelton spoke about the health benefits of what he was selling. Quail eggs are higher in protein, iron, potassium and vitamin B1 than chicken eggs. The meat is light, delicious and something that Haywood County has in its DNA.

“People used to hunt quail, but they don’t anymore,” Shelton said. “I’m providing them with a taste of what they forgot.”