Mural brings Dillsboro’s past and setting to life

Dillsboro will soon be graced with a large mural depicting the cultural heritage of the village, its key landmarks and its natural setting.

“On Hallowed Ground,” a four-panel 16-foot by eight-foot painting by acclaimed Jackson County painter Doreyl Ammons Cain, will be unveiled with a public ceremony at 10 a.m. Saturday, Oct. 5, in downtown Dillsboro.

Cherokee Principal Chief Michael Hicks and Cherokee Storyteller Freeman Owl will be on hand for the event, with Cain sharing the story of the mural, from inception to creation. The mural depicts the history of Dillsboro, including town founders William Allen and Alice Dills, and an early Cherokee Chief Nimrod Jarrett Smith, local building landmarks in town, as well as animals and frame next to the Jarrett House.

“This has been a wonderful thing for me and for the community,” Cain said. “It’s visually showing the heritage and the artistic beauty in this area, and that’s so important.”

For the last nine months, Cain has been constructing the mural. What started as an idea to promote and preserve the history of the town, the work came together through grants from the Jackson County Arts Council ($500), Asheville Area Arts Council ($3,000) and private donations ($2,500). The need for the grants came after two failed Kickstarter fundraising campaigns.

While Cain could not raise what she hoped for the project, she forged ahead anyway, largely donating her time to create the mural over the past several months from her yurt studio in Tuckasegee. The installation has been recently appraised at $48,000.

With little information about the story of Dillsboro readily available, Cain tapped the shoulders of George Frizzell, Head of Special Collections in the Hunter Library at Western Carolina University; Tyler B. Howe, Eastern Band of Cherokee Tribal Historical Preservation Specialist; and Amy Ammons Garza, Cain’s sister and co-founder of Catch the Spirit of Appalachia.

“Painting and piecing it together has been great, but I can’t wait to see it displayed for others to enjoy,” Cain smiled. “It’s amazing how much I’ve learned about our heritage that I don’t know. Putting this into the public eye is supremely important.” 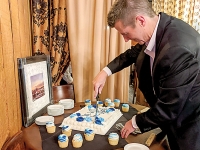 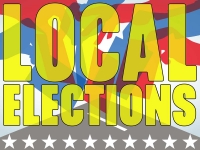 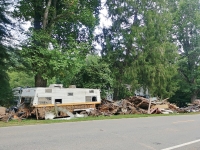