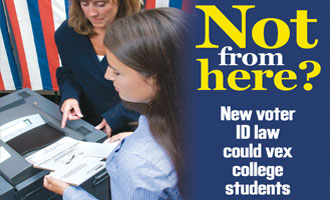 College students in North Carolina will have to make an extra effort if they want to vote in their college town — though it won’t be an impossible feat.

The greatest obstacle for students could be the new photo ID requirement at the polls. But not just any photo ID. A driver’s license with a student’s hometown address won’t fly at the polls.

“That was really the number one concern that I was hearing from students,” said Christopher Coward, head of Student Government Association at Haywood Community College. “It might make it harder for students to get out to the polls.”

Nothing is technically stopping a college student from registering to vote where they go to school. But the address on a their photo ID must be an exact match to the address they list on their voter registration.

“I can think of 20 students right now who probably don’t have their current address on their state-issued ID,” Coward said.

So under the new law, students wanting to vote where they go to college will have to make a trip to the local Department of Motor Vehicles office. If they go to the DMV and get a photo ID with their college address — be it for an apartment or dorm room — they can vote locally come Election Day.

“I think there should be some kind of system where we should be able to use our college ID,” Coward said.

The state will give out photo IDs through the DMV for free if you bring your voter registration card with you to show the DMV that’s why you want the ID.

All this adds an extra step.

“Students are busy people,” said Garrett Whipkey, president of Western Carolina University’s College Democrats. “I feel like this may add an extra burden.”

Then, there is also the transient nature of college students. The ID will likely only be good for one election cycle. Each year, students move into a different dorm room or apartment, so the address on the ID would make it invalid. They will again have to take time to get a new ID made with their updated address.

“A lot of people’s schedules are completely packed,” Coward said. “It is trying to fit one extra thing in.”

But not all students feel that way. The new ID requirement could be perceived as an extra barrier to the ballot box, but if students care about the elections, it won’t be a major deterrent, said Derrick Clayton, a leader with the College Republicans group at WCU.

“I just don’t think it will be that difficult to vote,” Clayton said.

A local address: harder than it sounds

For WCU, the matter gets a little stickier. The university doesn’t assign individual addresses to students living in the dorms. Everyone has one address that corresponds to a building where the mail is sorted and placed in P.O. Boxes.

“It would definitely not be a valid address,” said Lisa Lovedahl-Lehman, director of the Jackson County Board of Elections.

College students must use a physical address when registering to vote locally and getting their photo ID from the DMV —  the place where they lay their head each night. The university is looking into whether it will need to create addresses for its students to enable them to vote.

“We are just now trying to get a grasp of what it all means and how we can help students,” said Sam Miller, WCU’s vice chancellor for Student Affairs.

Right now, there is still limited information out there for WCU leaders to pass onto their students, but Miller said the university wants to ensure its students have a chance to vote.

“All of our students, we would love to see vote and take part in the democratic process,” Miller said. “Each student will have to make his or her decision as to what best suits them.”

A major challenge will be getting the truth about the law out to students about what exactly they need to do in order to vote. The rumor mill is already spinning about how the voting law will affect elections.

“A lot of students don’t know what the bill says,” Clayton said. “A lot of it is rumor.”

Most students aren’t receptive to learning about the actual changes, Clayton said, because they have already made up their minds about the law.

WCU officials send out emails every year instructing students about voting and will do the same when the key voting law changes go into effect in 2016 to ensure those who want to vote in Jackson County can.

“A lot of them consider this getting involved in the community,” Lovedahl said.

If it is too much hassle for students to vote where they go to college, they can always vote back home using their parents address. But that would mean traveling back home on Election Day or getting organized ahead of time to request an absentee ballot, have that ballot mailed to them, fill it out and mail it back.

Using a mail-in ballot would actually be a side-step for students who want to vote locally where they go to school but avoid the whole photo ID rigmarole.

A college student can register to vote where they go to school but then simply request an absentee ballot be mailed to them, avoiding having to go to the polls and risk a snafu with the photo ID.

One of the stricter changes initially proposed in the new state voter laws would have forced college students to vote in their home counties, typically at their parents’ address. Otherwise, the state would not allow their parents to claim their children as dependents on tax forms. The change would scatter the youth vote, which tends to lean Democratic. It did not make into the final passed bill, however.

The Watauga County Board of Elections recently made national news after closing a polling site at Appalachian State University. The move reinforced criticisms that the bill isn’t aimed at ensuring voting integrity as its backers claim but was instead an effort by Republican lawmakers to make it harder for left-leaning student voters to cast ballots.