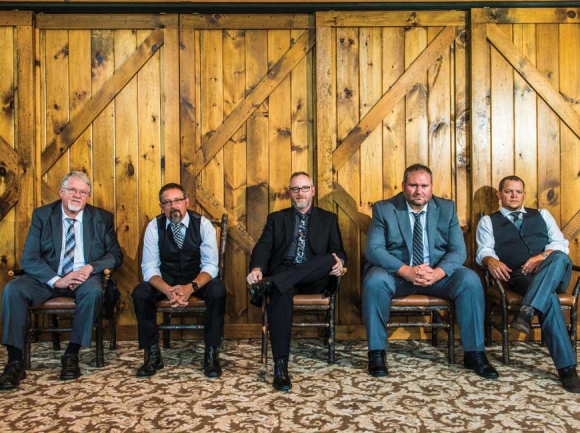 Bass/dobro for the beloved Haywood County, North Carolina, group, Surrett is modest (as per usual) in conversation when asked about Balsam Range’s tenure in the genre. Alongside Surrett is Buddy Melton (fiddle), Marc Pruett (banjo), Darren Nicholson (mandolin) and Caleb Smith (guitar). Since the release of their sixth album “Mountain Voodoo,” Balsam Range has garnered several chart-topping singles from the offering (“Something ‘Bout That Suitcase,” “Blue Collar Dreams,” “Eldorado Blues”).

“What keeps us all fresh with it is making progression all the time,” Surrett said. “There’s still stuff to be done. We’re not going back to the same ole things year after year, the same cow pasture things. I don’t know how long anybody could stand that — it’s not resting, it’s still moving forward.”

“For me, I’ve never gotten over the fact that we’re mentioned in these circles,” Surrett said. “I was listening to my Spotify playlist this morning getting ready to come over to the studio. I put on my Balsam Range station. It played us, then it turned around and played Hot Rize, then it played Del McCoury. And to be mentioned in the same breath with these people is ludicrous to me almost — I’ve never gotten over that, and I hope I don’t.”

Surrett is quick to point out the key to Balsam Range’s success, which is a long-time group of friends, all open to new ideas, new techniques and approaches to that high, lonesome sound at the core of their identity.

The former board chairman of the IBMAs, Surrett is optimistic about the future (and fate) of bluegrass, even when some say the lines of the genre are becoming too blurred.

“Even when I was chairman down there [in Raleigh], it has always struggled with what bluegrass is,” Surrett said. “Everybody has their ideas, and some people are pretty dogmatic about it. I know what I like, but the older I get, the less I expect everybody else to like what I like.”

Surrett looks ahead at not only the unfinished business of Balsam Range (a group that will be written about as “legendary” and “iconic” when all is said and done) onstage and in the studio, he also sees the bright potential of those coming up behind him.

“When you see guys like me — Pruett is 65, I’m 54 — and you’re walking onstage at Telluride or somewhere like that, with all these young people, way younger people, and they’re just losing their minds — that doesn’t happen in other genres of music.”