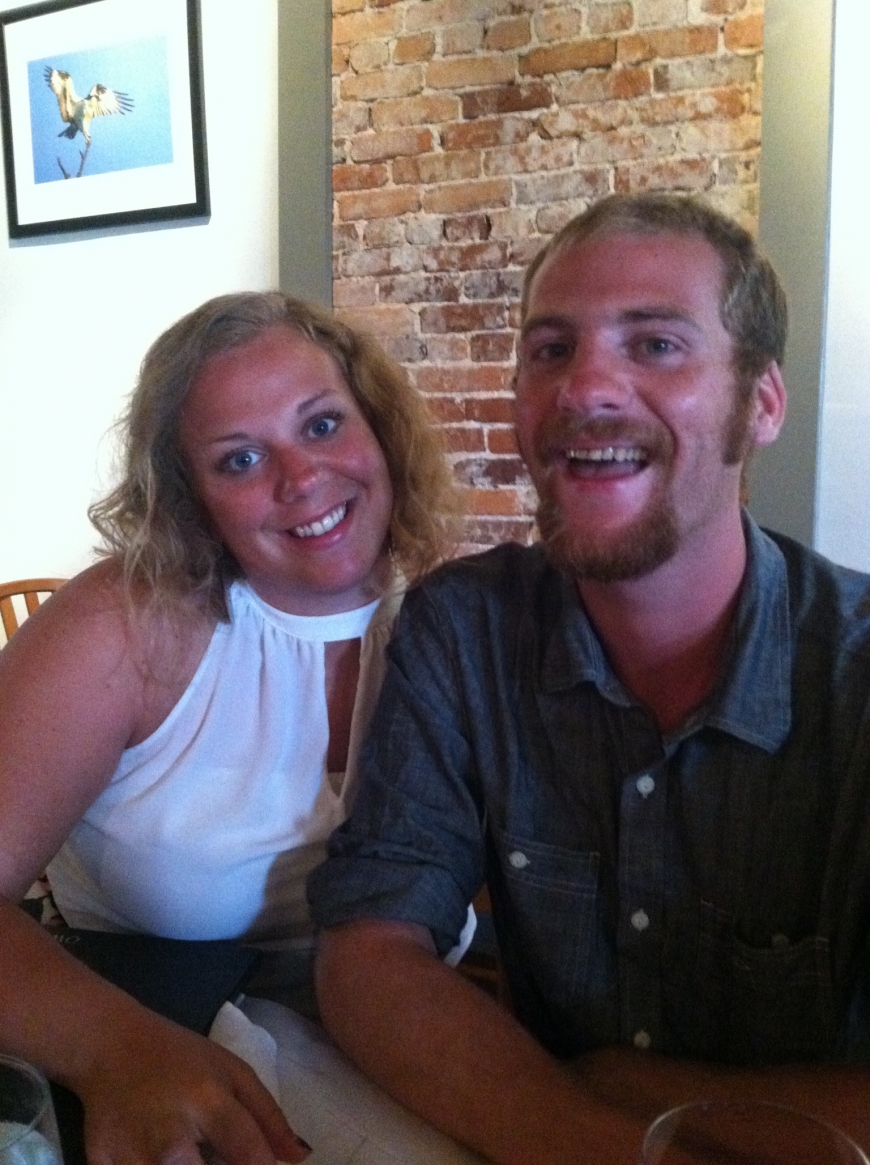 Annie pictured with her brother, Joseph McCord, who recently died from drug overdose. Annie says her brother was always her biggest supporter and always believed she could do anything she put her mind to.

Cullowhee Valley School will no longer be represented by the Rebel mascot, which is personified by an old, white, confederate general. That change was recently brought about thanks to the effort of local parents who voiced their opposition to the school board. Annie McCord Wilson led that effort. She herself attended Cullowhee Valley as a child and even wrote a letter to the editor to the Smoky Mountain News when she was an eighth-grader saying it was time to change the mascot. Nearly 20 years later, her perisistance paid off.

“People say it represents our heritage, and we should honor and respect it .... But there is much about our heritage I am not at all proud of. It is time to shed this unfortunate image of the past and to select a new mascot with positive imagery and associations," Annie McCord wrote in her letter.

Smoky Mountain News: You were only in the eighth-grade when you first started this, but can you perhaps discuss how society may have changed since you first went public fighting this?

Annie McCord Wilson: I was in 8th grade in 2002. I think our culture and society have definitely grown over the last 20 years, though there is still plenty of work to be done.

Clearly the JCPS leadership feels differently about the issue of the Rebel now than they did in 2002. As a culture, I think there is much more awareness about implicit bias and how we may be sending a message of discrimination, even without that intention.

Racial inequity has been a long interest of mine. I studied aversive racism and discrimination from a social psychological perspective in graduate school. These ideas have shown us that racism and discrimination can hide in even the most open minded, egalitarian folks, myself included, and that we need to accept this and actively work to make changes within ourselves. This is so  hard to accept about ourselves!

It is easy for us to think racism is dead, because outward racism is typically frowned upon, however our own implicit bias is something we must face in order to unify and build a brighter future for all. Though many in our community did not see the Rebel as a symbol of hate or discrimination, we must accept that many people did, and have understanding and compassion. The vast majority of supporters of the Rebel did not choose this mascot as a symbol of hate, but one of pride in our heritage, and it is important to understand this as well. However, the bottom line is that this symbol, intentional or not, can be seen as discriminatory and hateful. And, having been a member of this community my entire life, I know this is not how we want to represent ourselves.

SMN: Looking back, were you surprised at the apathy your requests were met with when you were a student at Cullowhee Valley?

AMW: Though this was a long time ago, I do remember various thoughts and emotions from that time. I remember feeling very supported by the numbers of people who wrote letters in support of this mission. Even as I got older, I would have like-minded people remembering me, and voicing their support, for writing this initial letter to the Sylva Herald.

I also remember lively debate with my classmates, many who were opposed to changing the mascot at the time, though always civil and light hearted. I remember being frustrated that the administration and leadership in the county would not really consider the request, and I will always remember being threatened by a man who called my home. I had to go back to your original article to remind myself of the reaction from the leadership at the time.

Looking back, as a parent now, it is very disappointing, and definitely did not age well. Your quote from the superintendent at the time noted that I had stumbled on to "an adult issue", though I was a senior student at the school, and the "issue" was my own school's mascot. He mentioned that he had "not had any complaints from adults", completely dismissing the "few African Americans" that did agree it should be replaced.

Though there were only a few African American families associated with the school at the time, I did attend school with several black students whose families had to grapple with the Rebel. As an adult looking back, my heart aches for these families and all families of color in the community.

I remember going to SMHS the following year, remaining close with a middle school friend who was black. We were walking down the hall one day and some older boys started cat-calling us, not an uncommon experience for freshmen girls at the time unfortunately, and quickly noticed their calling becoming more racially charged, using racial slurs, referring to my friend. I remember marching right down to the assistant principal and asking him what he was going to do about this and him responding, "there's nothing I can do." This will always stick with me, because there are plenty of things we CAN do. Retiring the Rebel is a step in the right direction.

SMN:  As for now, how important is it that the school board voted unanimously to do away with the Rebel symbol?

AMW: First, I’m grateful for the board’s decision—it was the right call and one they weighed carefully and transparently. Anyone following this issue was aware when it would be discussed and had ample opportunity to offer their perspective. It’s also important to note that the board’s decision was unanimous. To me, this is a strong show of unity at a time when politics, local and otherwise, can tend to be fractured. The tenor of their decision indicates that retiring the Rebel aligns with the board’s and our school’s mission of education and inclusiveness. School board members represent all districts in our county, and they were all on the same page with this decision. This sets a great example for our community moving forward, there are definitely a lot of feelings!

I feel overjoyed and excited that our community has made this positive change. But, as an adult, I can see and understand that many in our community are grieving this loss, so this tempers my excitement for sure. I care very much for this community, it is clear that we all do. As an adult I can understand this, but I may not have as an eighth grader!

SMN: What do you hope this says to your own daughter and other children attending Cullowhee Valley?

AMW: Firstly, I hope this shows students that it is important to consider perspectives other than their own and their family's. Though many people do not see the problem with such a mascot, we must be thoughtful about the experiences of others and have empathy. Many students and families have been hurt by this symbol in the past, and the decision to retire the rebel will save future families from this particular pain. I know this is a lesson I have consistently tried to instill in my own daughter.

Also, I hope this is a lesson in civil discourse, though I am glad my daughter is not on social media to see some of the vitriol being spit at her mother. I believe my team and our community largely set a good example of respectfully approaching a sensitive issue, especially during this time when we all have such a full plate. Further, I think that the decision to replace the rebel with a mascot chosen by the students shows them that their voice does matter and that they can help shape the future of our community and the world.

Finally, persistence pays. This is an issue that has been on my mind for 20 years. 2002 was not the right time for our community to grapple with this decision, but we were clearly ready to do so now. I want my daughter and her peers to know that they should stick to what they think is right and just. As long as we are considerate and mindful of each other, we can make change together.