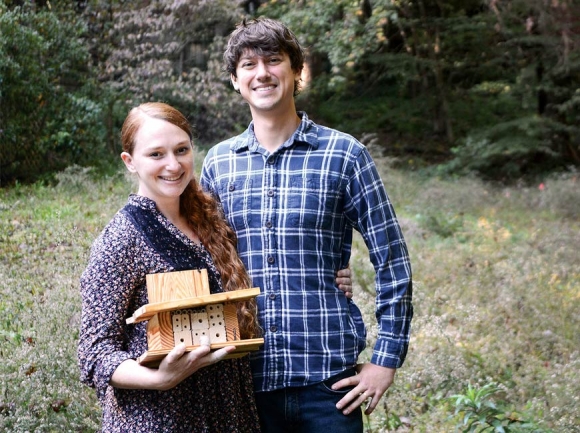 Jill Jacobs and her husband Brannen Basham hold up one of their handmade bee houses amid flowering native plants at their home in Waynesville. Holly Kays photos

Brannen Basham spends more time puttering around the yard than the average homeowner, but the result is not what most people would picture when asked to envision a well-cared-for lawn.

The grass below the home that Basham, 32, and his wife Jill Jacobs, 31, purchased in Waynesville last year is scattered with sprawling plants that some people would call weeds but Basham and Jacobs think of as vital nectar sources for native pollinators. Multiple species of asters and goldenrod grow bushlike above the grass, and a leafy plant proliferates sporting clusters of tiny pink flowers that droop at the end of the stalk — it’s called smartweed, Basham said. The yard is filled with myriad species in various stages of flowering or seeding, but very little grass.

“When you come out here, almost every one of these flowers is teeming with bees,” said Jacobs as she and Basham walked the backyard, naming plants along the way.

The buzzing insects are kind of the point of the whole thing.

Jacobs and Basham are partners in life, but also in business. They moved to Western North Carolina from Philadelphia in June 2016, soon thereafter launching an enterprise focused on helping people be better hosts to the more than 4,000 species of native bees that live in North America. It’s called Spriggly’s Beescaping, named for the nickname of their plant-loving cat Lucy.

It’s not exactly a common type of business, but for Basham and Jacobs it seemed a good fit. Basham is a horticulturist and Jacobs works in marketing and web design. They’re both passionate about nature, conservation and bees.

Basham found himself initially pulled in by a book on honeybees, which are immensely important not only for making delicious honey but for pollinating America’s crops. They’re also facing severe challenges due to factors such as parasitic mites invading their hives, pesticides and habitat loss.

“We like to say that honeybees are the gateway bug,” said Jacobs. “It’s really the way people see the connection.” 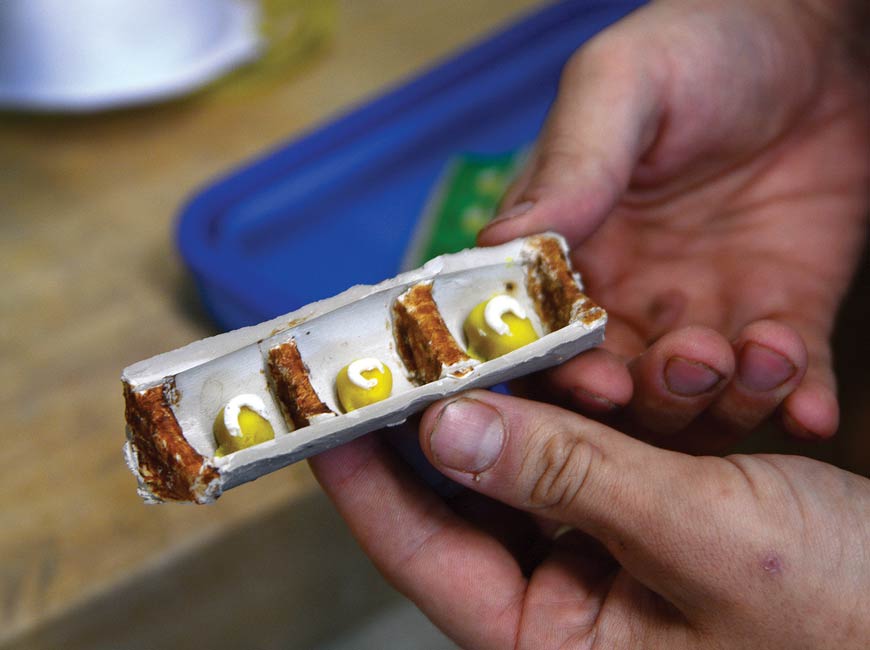 Brannen Basham holds a model depicting what the inside of a mason bee nest looks like.

That certainly proved true for the creators of Spriggly’s. The more they realized how “fascinating and humbling” honeybees are, the more they began to appreciate the diversity and importance of native bees. Honeybees are not native — Europeans brought them over in the 1600s. Meanwhile, North America holds about 4,000 species of native bees that are designed to interact with New World ecosystems in very specific ways. They don’t make honey, but they do perform incredibly efficiently when it comes to pollination.

For instance, Jacobs said The Orchard Mason Bee by Brian Griffin states that it takes only 250 native orchard bees to pollinate an acre of apple trees compared to at least 20,000 honeybees.

“It’s 2018 and we like to think of ourselves as living in the future, but we still know so little about so many of these insects,” said Basham. “A lot of these native bees, we don’t even really understand where they live or how they live their lives.”

What Spriggly’s aims to do is to teach people what is known about native bees and how to support them, and to help customers design and plant gardens that will be effective at giving native bees a leg up.

Spriggly’s does educational talks, exhibits — the company now has an Insect Exploration Station exhibit at the Asheville Museum of Science — garden landscaping designs and builds bee houses that it sells on Etsy and at festivals. They’re working on two different books as well, one a collection of columns Basham has written on native plants and pollinators and another a kids book about a day in the life of a mason bee.

It’s a lot, but it’s still largely a side hustle. Basham works part-time for Spriggly’s and part-time as a horticultural consultant in Cullowhee; Jacobs has a fulltime job as the marketing manager for the Western Carolina University Bardo Arts Center.

But ultimately, they’d like to be able to focus in on educational exhibits and talks as the company’s main source of income, because for Spriggly’s, education is the key to helping the bees. The more people know about how the bees live and the jobs they do, the better they can make individual decisions to help them. As hard as honeybees have it at the moment, for native bees the situation is worse, Basham said.

“Honeybees might be in trouble, but they’re also livestock and they can be managed by humans, whereas these native pollinators really need support more than anything,” he said.

Native pollinators are losing habitat left and right, and in many cases they’re also competing with honeybee colonies for nectar. But there are three simple rules, Basham said, that anyone can follow to make their home more friendly to native bees.

For one, have something in bloom during each growing season. Native shrubs and trees like maple, redbuds rhododendron and Virginia sweetspire are good bets in the springtime, with sunflowers, Echinacea, asters, milkweed and phlox solid summer choices. In the fall, Basham suggests goldenrod, Joe Pye weed and jewelweed. Second, Basham suggests planting flowers in clumps at least 3 feet wide to make them an easier target for insects flying overhead. Finally, a bee-friendly yard should have places for the insects to nest and stay warm over winter. This includes leaving some spots, even small ones, of bare soil, and allowing some piles of leaves or mulch to survive autumn raking. Bees also like to nest in hollow stalks such as blackberry and raspberry cane.

Such measures will result in a yard that bees find attractive, but unfortunately that outcome sometimes clashes with human ideals of horticultural beauty. Many native flowers are prone to a weedy appearance, and a yard that’s spared the blade of a lawnmower to allow insects to thrive will quickly begin to look unkempt. Switching to a pollinator-friendly mindset is almost about switching to a new way of seeing.

“We received a lot of flack from our neighborhood at first for our garden,” Jacobs admitted. “Of course everyone wants these pristine mowed lawns, but we just told them we’re doing this for insects.”

They don’t use any pesticides, trim out non-pollinator-friendly plants by hand, and just let things grow naturally. And, they take every opportunity to talk to their neighbors about why they’re doing what they’re doing. It’s worked, Jacobs said. The neighbors now understand why the yard looks like it does, and as Basham continues to perfect the collection of plants growing there, the bees will only benefit.

And not just the bees. Insects and pollinators of all types.