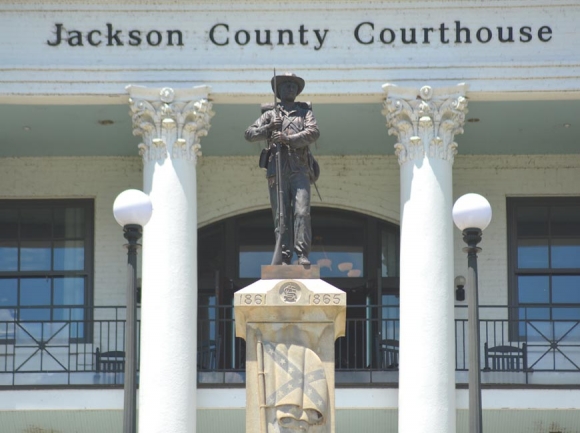 A final decision is likely on the fate of the Confederate statue looking out over downtown Sylva after the town board voted 3-2 July 27 to approve a resolution officially asking Jackson County Commissioners to remove it from town limits.

The statue depicting an unnamed Confederate solider was erected in 1915 to honor those who fought in and supported the war effort. It sits midway up the prominent staircase connecting Main Street and the historic courthouse. While it’s a fixture of the often-photographed downtown Sylva scene, the county — not the town — owns that property.

However, the county’s power to move the statue is unclear. A 2015 state law provides that “an object of remembrance located on public property may not be permanently removed and may only be relocated … An object of remembrance that is permanently relocated shall be relocated to a site of similar prominence, honor, visibility, availability and access that are within the boundaries of the jurisdiction from which it was relocated.”

Sylva resident Tracy Mann said that she fears tourism could suffer if the local government declines to act. People of color might decide not to spend their money in Sylva, while people looking for a green light toward racism would be encouraged.

“While there may have been soldiers who fought for their land and their property and their children, they also fought for a cause, and that cause was the Confederacy that literally wanted to preserve people as property,” she said. “The individual soldier’s motivation in this regard is irrelevant.”

Sylva resident Frank Huguelet had a different perspective on the purpose of the bronze solider overlooking the town. It’s the closest thing he has to a tombstone for his ancestor John Parker, who was thrown into a mass grave after his death from dysentery in a Union prison camp.

“Hundreds of men went out to fight. Thousands of ancestors are left,” said Huguelet. “Dividing a community based on a national political movement is wrong. It’s a bad precedent to set. The majority of the people in this country want to keep it.”

The town board had originally planned to vote on the issue during its regularly scheduled meeting Thursday, July 23, but the meeting was cut short following an onslaught of racial slurs from unidentified attendees on the Zoom call.

The disjointed sentences from an account named Adira Sahar didn’t have the cadence of a rant — rather, they came across as barbs intended to incite anger, fear or confusion. The male speaker made liberal use of a racial slur targeting Black people, claiming to have “25 child Black slaves,” and proclaiming that “Black lives don’t matter,” among other insults, slurs and profanities.

Two other accounts, named Katy Kenz and iPhone — this account featured a dark silhouetted figure on a dark background — also broke in occasionally. Town Clerk Amanda Murajda ejected the three accounts from the meeting and town commissioners, visibly shaken, attempted to continue on with the agenda.

However, the infiltrators weren’t done. An account that had named itself Eric Ridenour — the same name as the town attorney — began making lewd comments on the chat, and a female voice under an account named Town of Sylva began saying the names of various people in attendance in a creepy, sing-song voice.

Commissioners then voted to recess the meeting, sending out a new Zoom link that same morning. However, due to concerns about being able to keep the link secure from Zoom bombers while still allowing access to the general public, the board ended up voting to finish the agenda in a special-called meeting at 5:30 p.m. Monday, July 27.

At the request of the Sylva Police Department, the State Bureau of Investigation is now seeking to identify the people responsible for the July 23 incident and plans to apply any applicable charges, according to a press release from the town. Call 828.586.1911 with information about the identities of anyone involved.

A vote to remove

On July 27, town board and staff members participated in a Zoom call, admitting those wishing to give public comment one at a time and broadcasting the video in real time using Facebook Live. Multiple speakers and town board members pointed to the July 23 incident as proof that racism is alive and well today, a reality that should heighten the urgency of removing symbols that celebrate it.

“This was an act of racism that happened in our community,” said Commissioner David Nestler, who introduced the resolution to remove the statue. “Nobody can deny that racism exists here any longer. It is recorded in the minutes of an open meeting. It is time that as a community we acknowledge this and we work to fix it. People in our community need to stop telling people of color that racism doesn’t exist here.”

Kelly Brown, a leader of the effort to remove the statue, concurred with that sentiment.

“After last week’s event, my speech is just very simple,” he said. “If we want to continue to say that racism doesn’t exist in this community, then we are totally being blind.”

The majority of the board agreed with Brown’s perspective that removing the statue would be a positive move toward making Sylva a more inclusive and welcoming place.

“Until justice means the same thing for all people, regardless of labels, I will continue to support this relocation,” said Commissioner Greg McPherson. “We have to face this now. No more bigotry. How long do we have to glorify the myth of the lost cause? How long must we look at that statue and be reminded of the darkest part of our past?”

“The future of our town is our youth,” said Commissioner Ben Guiney, “and our youth understand this is something that can no longer be tolerated in our public space.”

“It represents a particular group’s heritage, and that group’s heritage has been put up on a pedestal above all else in Sylva, and that’s wrong,” said Nestler. “There’s no two ways about it. This vote is about putting that history in its proper context.”

However, Commissioners Mary Gelbaugh and Barbara Hamilton, who voted against the resolution, did not feel the issue was quite that clear-cut, with Hamilton expressing a wish for more discussion before moving ahead with a vote.

“This should be a memorial to the fallen of both Union and Confederates who were not allowed a choice but were ordered to fight and serve,” Hamilton said. “They didn’t want to do it, but they were forced to do it. We can remove flags and statues all day, but until we figure out how to remove the hate in people’s hearts, nothing will ever change.”

Gelbaugh said that while it is everyone’s duty to call out white supremacy and racism where they see it, the statue isn’t the source of those evils.

“I don’t give a monument that kind of power,” she said. “I believe that faith and fear cannot occupy the same space, and I choose to go on my faith. And my faith tells me we can make this a win-win and we can make this be a county in which everybody feels safe and feels welcome, and that’s up to us as individuals.”

Ultimately, Nestler voted to pass the resolution along with McPherson and Guiney. Gelbaugh and Hamilton were opposed. Because in Sylva the mayor votes only in case of a tie, Mayor Lynda Sossamon didn’t vote but did tell those attending that “by removing the monument, which is metal and stones, it’s not going to remove racism from our hearts. It’s only when we replace that with love that we’ll be able to move forward.”

The Jackson County Board of Commissioners will likely take the up issue now. The board’s next regularly scheduled meeting is 6 p.m. Tuesday, Aug. 4.