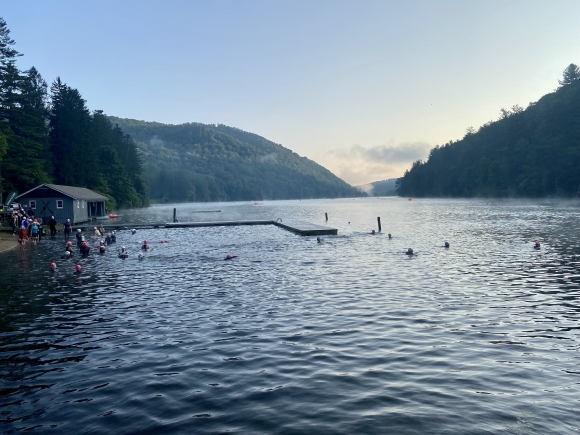 Several weeks ago I wrote about my anxiety surrounding the Lake Logan triathlon. At the time, I’d been training since April but had yet to register. My anxiety concerning the open water swim was extreme. I honestly just didn’t know if I could survive it. I know I sound dramatic, but it’s the truth. The entire experience was emotionally draining, but luckily I learned a few life lessons along the way.

The week leading up to the event was all-consuming with triathlon preparation, making sure I had all my equipment and completing final workouts. I swam four open water swims that week trying to mentally prepare for race day. My boyfriend, Matthew, swam with me each day so I could swim sans buoy. We swam side by side, him with a buoy, me without. The swims went pretty well, except for my final swim. I had a panic attack in the water and had to take Matthew’s buoy and put it on so I could make it back to the shore.

I can’t pinpoint the exact reason for my anxiety. I know I’m not going to drown. I know I’m physically fit enough to swim the yardage. I’m not scared of the dark water. I don’t think something is going to pop out of the water and bite me. I just don’t know. Sometimes I wonder if maybe I drowned in a previous life and the trauma has carried on with me.

The night before the triathlon, I woke up in the middle night and decided I was going to transfer my registration to Matthew. He’s training for an Ironman race so he could easily complete a sprint triathlon. I even woke him up in the wee hours to let him know we should tune his bike.

The next morning I felt more confident. I told myself that worse case, I could turn around and head back to shore or have a kayak lifeguard guide me to safety.

Ironically, I actually enjoy open water swimming. It’s freeing and enjoyable, especially during the early morning hours when the sun is rising and a new day dawning.

After warming up, I took my place on the dock with the other women in my wave and said a few prayers. When the time came, I started the race and worked to control my breathing. Interestingly, I was fine for the first two-thirds of the swim, but then something happened. I started overthinking, breathing too quickly and felt panicky. I had to call over a lifeguard on a paddleboard. I hung on to his board for about 30 seconds to collect myself before carrying on.

I was so determined to finish the race and not disappoint myself that I continued and kept swimming. Once the swim was complete, the bike and run were no problem. In fact, I felt I did my absolutely best on those two portions.

Upon reflection, I’m still unclear about what caused the panic later in the swim as opposed to the beginning. Maybe I started out too fast or maybe I swallowed too much water at a corner turn when some other swimmers were also making the turn.

I don’t know and it doesn’t really matter.

We all have things that make us anxious and if we can overcome them, it’s such a feeling of elation. According to my Garmin watch statistics, my heart rate and stress level were extraordinarily elevated for the rest of the day and part of the next day, so I can see how chronic anxiety would debilitate a person.

Very few times in my life have I felt as anxious as I did during the week leading up to the triathlon and during the final one-third of the swim. Yet funny enough, I’m already digging deep to see if I want to attempt another triathlon. I’ve completed two thus far and have panicked during the swim both times. I’ve talked to many other triathletes who have had a similar experience. While that makes me feel better, it doesn’t necessarily mean I want to put myself through it again.

I’m not sure what they future holds, but I learned two lessons at Lake Logan. One, anxiety is a monstrous force if it can’t be contained. Two, I had more physical grit in me than I realized.

The universe has a funny way of putting experiences in our lives for specific reasons. I feel this triathlon was one of those for me. It was an emotional roller coaster, but one silver lining is I’m in the best shape of my life. I’ve already signed up for a half marathon next month. Perhaps one day I’ll do another triathlon but for now, I think I’ll stick to solid ground.

5 Tips for Traveling with Kids & Teens