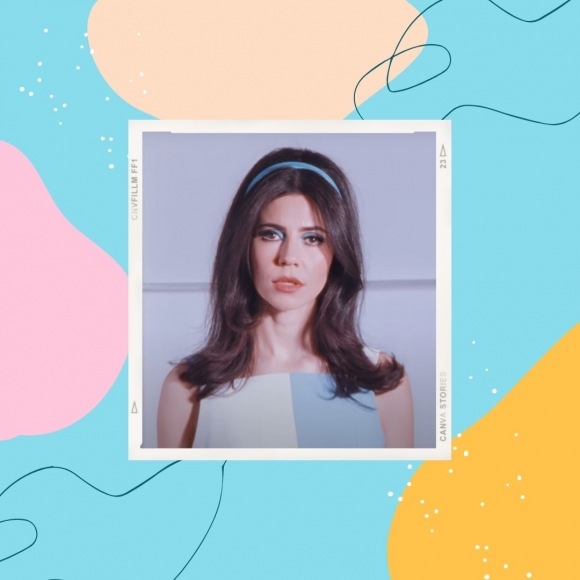 By Daley Hooten • Rumble Contributor | On June 11, Welsh pop singer Marina released her latest album, “Ancient Dreams In a Modern Land,” and announced her upcoming tour in 2022. I had been signed up to receive newsletters from her, so as soon as I got the news I jumped on my laptop, turned up the volume and jammed out for the next hour.

Marina’s early music reminds me of my middle school days, and how I used her music to drown out those three years of pure chaos and awkwardness (because let’s be honest, I don’t think middle school is anyone's favorite time of their life). Braces, skinny jeans, side parts, awkward boy interactions, dumb drama and band teachers. All these things I desperately tried to escape with her albums “The Family Jewels” and “Electra Heart.”

Her electronic, bubblegum-pop music is not only filled with catchy beats that make you want to dance, but with profound messages that hit a little too hard today. Lyrics like, “TV taught me how to feel/Now real life has no appeal” (from the song “Oh No!”) and “High achiever, don't you see?/Baby, nothing comes for free” (from the song “Are You Satisfied?”), hit especially close to home after the past year in quarantine. Being stuck at home re-living the same day over and over again, back-breaking pressure from school (or work) and the stress of current world issues is enough to make anyone go crazy. To continually deal with these things has definitely changed me from the person I once was, and now deep lyrics like Marina’s start to feel unsettling familiar. It’s crazy to think about the times I used to listen to her music and sympathize with her lyrics, but not feel connected to them like I am today.

I am now a junior in high school and had been counting down the days until she released the new album. Once it was out, I was nothing short of amazed. “Ancient Dreams in a Modern Land” lives up to everything I expected from her and more. Her album deals with many topics such as misogyny, heartbreak, the world's environmental crisis, racism and sexism in the music industry. It starts off with a bang with “Ancient Dreams in a Modern Land.” It’s electric, intense, bouncy and is accompanied by a psychedelically-visual music video. It sets the stage for this album and the new era Marina is entering.

Track number 2 is titled “Venus Fly Trap.” This song is about being proud and growing to love yourself in a harsh world that will find a way to ridicule you no matter what.

“You're in a losing battle, babe, you'll never stop me being me,” is a powerful line that shows how she isn’t going to let anyone change her, and how she’ll continue to be an artist her own way. The music video that accompanies this song is also mesmerizing. Marina jumps through different Hollywood cinematic era’s during the number, representing the struggles of how women need to continually reinvent themselves in order to succeed in the acting or music industry. Marina’s third track is titled “Man’s World.” One of my favorite lyrics in the song, “Burnt me at the stake, you thought I was a witch/Centuries ago, now you just call me a bitch,” reinforces the idea that no matter what age we’re in, men will always try to find a way to  reassert the patriarchy they hold so dear over women. In the chorus, Marina sings, “Mother Nature's dying/Nobody's keeping score/I don't wanna live in a man's world anymore.” This brings up the growing problems of the climate crisis and how once again the patriarchal world is harming mother nature by putting their greedy interests over hers.

Finally (although this is certainly not the end of the magnificent album), I’m going to end my review with “Purge the Poison.” It is probably my favorite track from the album. Once again, it is an electric pop song that will get anyone on their feet to dance. But, if you listen closely, it might be one of the most politically outspoken songs on the album. I’m going to give you lyrics from the song, instead of analyzing each line right away so you can see what I mean:

“Mother Nature's on the phone

‘What have you been doing? Don't forget I am your home.’”

“Britney shaved her head and

All we did was call her crazed”

Me Too went on to unveil”

“I just want a world where I can see the feminine

We only make up one-quarter of the government”

I mean wow, and this is only a fraction of what is talked about in this song. The climate crisis, effects of capitalism, the horrors of America, misogyny, the Me Too Movement, racism and more political opinions keep coming out of this song.

This is why I love Marina so much. She is unapologetic and so outspoken about her opinions and ideals. This is what sets her apart from pop singers today. She does a tremendous job of creating such powerful lyrics with important messages, all while interweaving a disco jam into it so we can dance like crazy and be outraged about the patriarchy at the same time. I feel like her music was made for me.

Those that know me well know that I am at all times raging about politics and the state of the world. My room is covered floor to ceiling with band posters, political signs and stickers. When you put two and two together, you have a catastrophe of a teenager. But when you get an album like “Ancient Dreams in a Modern Land,” you can appreciate it for all of the things that it is: vibrant, fun, mesmerizing, political, immersive, important, and all around fantastic. I am hoping that once this pandemic comes to a close, I am able to see her perform live, experience her music and thank her for everything she's given us.

(Daley Hooten is a high school student, writer and music aficionado living in Asheville, North Carolina. This email address is being protected from spambots. You need JavaScript enabled to view it..)

Navigating this new normal as a mom and a teacher