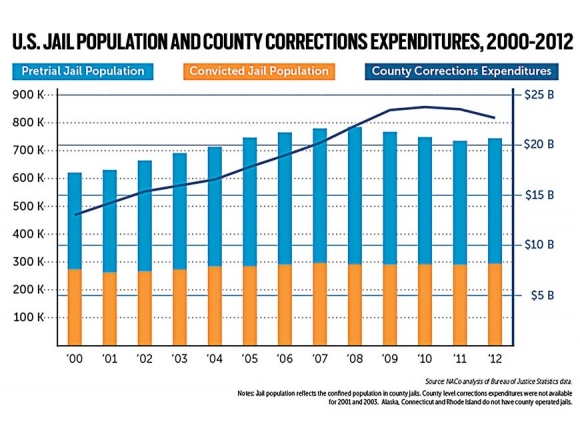 “That’s when we started our pre-trial services. Now our jail population has gone down by 20 percent. We don’t have an overcrowding problem and our average daily population is lower than it has been since the jail opened,” said Gudrun Parmer, director of the Criminal Justice Resource Center in Durham County. “We can’t reduce the cost of the jail itself — most of that cost is fixed — but we are 15 years past the point where the county started talking about building a new one so we’re saving future costs.”

The work involved to get to those results hasn’t been quick or easy, but Parmer said the payoff has been worth it for the county. The Criminal Justice Resource Center in Durham County has been in place since the late 1990s when the General Assembly passed reforms that put more uniform sentencing in place for felony convictions. The state reform also included grant funding for most counties to allow them to provide services to people being sentenced under the new grid.

With more state reform coming out of the General Assembly in 2011, the original grant funding that helped establish the Durham resource center was done away with, but efforts have continued and programming has increased to provide services to people throughout the criminal justice system.

“In Durham, our community has grown well beyond that original program. We have services for people from the pre-arrest diversion programs all the way to our local re-entry program for when people are released,” Parmer said.

The center still goes after a number of grants each year, especially if it’s looking to start a new program, but Durham County funds the programs that are deemed a success after a good trial run. A consolidated county criminal justice department also helps to save money.

“If we add a program, we don’t have to add administration — it’s more cost effective and we have a seamless system at this point for the adult population,” she said.

The pre-arrest diversion program is targeted for first-time offenders ages 16 to 21 for misdemeanor charges. Instead of being arrested, the person has 90 days to complete a community diversion program based on their individual assessment and needs. If the person completes the program, the incident report is closed out and the offense doesn’t show up on the person’s record. If the person doesn’t complete the program, the arresting officer can proceed with criminal charges and prosecution.

The substance abuse and the mental health court diversion programs inside the jail have also been helpful in keeping the inmate populations down while getting people the help they need.

“We have the most extensive mental health services in any jail in North Carolina — we have a whole team of people,” Parmer said.

The team works with inmates who’ve been diagnosed with severe or persistent mental illness to get them on the right medication, getting support while in jail and helping them connect with community health services once they released. The Mental Health Court allows people with mental illness to go through support services in lieu of a formal court process.

The same goes for people suffering from drug addiction — if they complete the program the district attorney will drop the charges.

Durham County even has re-entry services to help people get back on their feet after they are released from jail in hopes of cutting down on high recidivism rates. The resource center’s team of caseworkers is on hand to help people find housing, employment, get medications, food and clothing. These services are typically available for two to six months after release to ease the transition. Parmer has found that most people being released from jail don’t know where to turn for assistance and often times they’re in a worse position than when they were arrested. They could have lost their job, their children and any other stability they had in the community.

“We also connect people that have no support system with a faith-based group that will then become their support system when they’re released,” she said. “People just need somebody to help them maneuver the system. They need to know and see what it’s like to lead a life without drugs — it’s not always glamorous.”

More recently the resource center received a grant through the MacArthur Foundation to develop a notification system to remind people of their court date. This is one method local jurisdictions are testing to see if the money bond system can be replaced.

“With the IT department, we developed a web app where people can sign up for court reminders. It’s free and it was developed in a way that it could be used by any county in North Carolina,” Parmer said. “We started it a year ago and utilization is rising steadily. We have about a third of our cases on there for reminders. The grant is finished but we’re continuing it. It’s a customer service thing that really the state and the courts should be providing.”

“It’s not easily analyzed statewide, but I’d say probably 10 percent of people in criminal District Court in Durham don’t show up,” she said. “If you’re picked up on a failure to appear, it’s a county cost and a tremendous amount of paper work for the state to process.”

The tangible success is that Durham County has decreased its jail population by 20 percent and isn’t looking to spend millions in the immediate future to build a new detention center. Also, the resource center’s diversion programs have had a 90 percent success rate, meaning only 10 percent of clients return on another arrest.

Parmer said there have been even more anecdotal successes that have come out of offering more services. The employment program finds temporary positions in the county government for people released from jail. The resource center’s clients can work with a department full time for six months at $15 an hour. At the end of the six months, Parmer said many have been hired on permanently as a county employee. She’s stopped seeing many of the same people struggling with mental health or addiction coming back into the jail time and time again. People who’ve gone through the substance abuse program are still attending NA meetings some 20 years later. Recovering addicts are also becoming leaders in these programs, whether it’s through NA or by becoming a peer specialist at the resource center.

“Some people we have connected to the faith community are now working as a coordinator for a program,” she said. “We’ve established peer support positions because we know that someone who has gone through the system can provide much better insight and connect better to our clients.”

The biggest improvement the resource center has made is moving people more quickly and efficiently through the system by providing them with the services they need to work toward rehabilitation and stabilization.

“The real impact we have is having services along the continuum to help them move forward,” Parmer said.

Her advice to other counties just getting started on trying to rein in overcrowded jails is to start by examining the jails — knowing who’s in the jail, what they’re charged with and how long they’ve been incarcerated.

“Start with a data analysis and begin looking for easy opportunities — lower level cases — for release. Ask is it worthwhile for your community to lock someone up for a week for shoplifting because they can’t post a $500 bond. We need to ask ourselves if we can give someone a citation and still charge them without arresting and booking them,” she said. “We need to make sure we’re locking people up for the right reasons.”