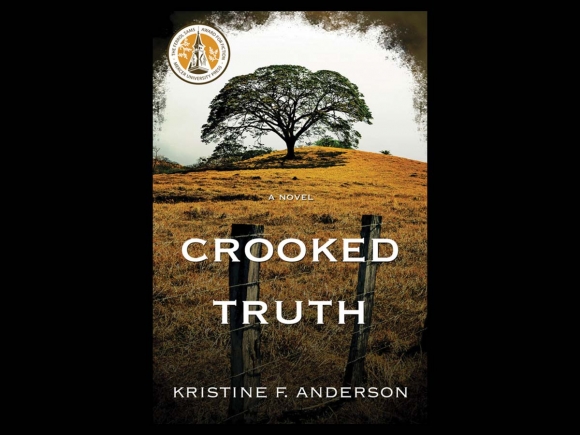 Years ago, a friend and I were watching some news show like 60 Minutes about juvenile murderers. The point of the report was that these young criminals showed little or no remorse for their shootings and stabbings, and in fact seemed to lack any sort of moral compass that most of us take as a given. When I wondered aloud about a solution, what might be done to change these stonehearted murderers, my friend looked at me and said, “Some people just need killing.”

I thought of that remark when I encountered Alvin Earl, the 46-year-old drunk, gambler, and good-for-nothing scumbag who appears in Kristine F. Anderson’s novel Crooked Truth (Mercer University Press, 2020, 214 pages).

It’s 1948, and 15-year-old Lucas Webster, orphaned when his parents died in an automobile accident, is living with his grandparents on their farm near the fictional town of Crisscross in South Georgia. Besides going to school, Lucas helps with chores around the farm and tends to his Uncle Robert. Born with Down Syndrome, Robert is loved by those around him — Paw Paw, Granny, and two hired workers, the cook and housekeeper Corinthia and her husband Little George, who keeps the farm up and running.

Lucas doesn’t mind the farm work, but dislikes Robert tagging along all the time and dreams of the day he can leave his uncle and the farm behind him. The real bane of his life, however, and of Robert’s, is Robert’s half-brother, Alvin Earl. Every time he shows up, Alvin Earl makes a point of tormenting Robert. In one scene, for example, Granny is playing the piano and Robert is singing “Clementine.”

After he finished the last line, Alvin Earl clapped and asked, “You can train a monkey or dog to do tricks. Which one is he?”

Granny jerked her pale fingers off the keys and froze. Alvin Earl’s question hung in the air like a bad note and silence filled the room. When no one answered, he asked again, “Is he a trained monkey or a circus dog doing tricks?”

Glancing at Robert, I knew he didn’t catch the sarcasm in Alvin Earl’s voice or understand his question. He thought it was funny and laughed. “I’m not a monkey. I’m not a dog. I’m your brother.”

“I don’t get a word he’s saying. He talks like he’s got a mouthful of grits.”

Worst of all, the wastrel Alvin Earl is counting on inheriting the house and land when the sickly Paw Paw dies. He intends to yank Lucas out of school and put him to work full-time in the fields, ship Robert off to a mental institution, and fire Little George and Corinthia.

But Paw Paw thwarts these plans. Just before he dies, he changes his will, establishing an education fund for Lucas and leaving 40 acres to Little George. When the will is read, Alvin Earl explodes, drinks even more heavily, and soon finds himself threatened by loan sharks.

One bit of light shines for Lucas when Amelia Weinstein from New York arrives as a new student in school. She’s a slender, no-nonsense, bright girl, and she and Lucas become study partners and then best friends.

To further describe the plot would ruin this novel’s ending.

In addition to her finely told coming of age story, Anderson gives readers several other gifts in Crooked Truth. She has a real ear for dialogue and dialect, which is difficult for many writers. Her characters are as memorable by what they say and the way they say it as by their actions.

Moreover, the descriptions of farm life and rural Georgia — the poverty, the good and the bad relations between blacks and whites, the joy of going to the movie theater and watching a Hopalong Cassidy film, the simple pleasures of fishing or playing hide-and-seek — give us a memorable picture of a world that today sometimes seems as far away in time as Babylon. (One quibble here: At one point, one of Robert’s beloved chickens has died. He starts sobbing, and to comfort him Lucas promises to help bury the hen, saying, “We’ll find a place near the roses. The ground’s real soft back there. We can dig a hole deep enough to keep the coyotes away.” If I’m not mistaken, coyotes didn’t appear in Georgia until the 1970s.)

Finally, this family — and there’s a surprise in store near the end of the novel regarding one family relative — feels real. In another writer’s hands, Granny and Paw Paw, for example, could easily have become stereotypes, ignorant or calloused, what some might derogatorily call “Georgia crackers.” Instead, both of them possess an innate nobility, giving love to those around them and acting with justice and compassion in their defense of family and friends.

Near the end of Crooked Truth, Lucas tells us the main lesson he’s learned from his ordeals: “There’s no such thing as the perfect truth or absolute right. And sometimes families have to pull and twist the truth to survive and move forward.”

Crooked Truth has been nominated for the 2021 Willie Morris Southern Fiction Award. Winners will be announced in October. But whatever the outcome of that contest, here is a writer who has done herself proud.