Abandoned, dilapidated and sometimes forgotten burial places are likely to get better care now that Macon County commissioners have decided to form a cemetery board.

Macon Schools may cut teacher bonuses to save positions

To deal with a gaping budget shortfall, Macon County Schools might raid the local salary bonus it historically awards its teachers.

It’s not the strength of your resume — it’s who your friends are.

Macon board plows into floodplain rules

The Macon County planning board signaled its intent this month to loosen rules on development in floodplains.

Business owner Marion Jones claims to sit on Sylva’s Main Street watching traffic more than any other person in town.

Forest Hills mayor race down to the wire, but not in the way you might think

The clock was ticking. There were just two days to go for mayor candidates to step up to the plate in the small village of Forest Hills — and still no takers.

The steady decline of the Golden-winged Warbler on the Southern Appalachian landscape is a trend that not only threatens the future of the bird in Western North Carolina but also puts in peril the species as whole.

During the past century, it has experienced one of the most precipitous population falls of nearly any other songbird species. Brought on by habitat loss and interbreeding with a more dominant species of warbler, less than 500,000 exist in the United States. 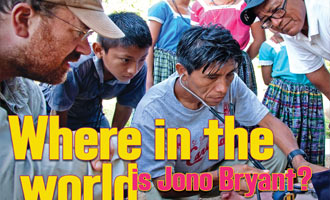 After a tumultuous start to hashing out a blueprint for this year’s finances, the Jackson County Tourism Development Authority reached a moment of harmony last week when its members unanimously adopted a budget.

Since Harrah’s Cherokee Casino and Resort added table games with live dealers last year they’ve had to round up hundreds of new card dealers — and they’re still looking for more.

There was no shortage of work to be done when N.C. Missions of Mercy, a mobile dental camp, came rolling into town last week and set up shop in Cullowhee.

The Main Street gazebo in Franklin could soon see a facelift, or, even be replaced with an entirely different structure.

Presented with a tempting yet expensive offer, the Village of Forest Hills has to choose whether to buy an abandoned golf course in the center of its small community, or stand by and watch it be developed.

What goes in must come out: that’s the basic premise behind your water and sewer bill. Sewer fees simply mirror the water bills.

Macon County airport runway expansion in the works once more

Macon County could once again find itself with a bigger airport runway — this time wider.

Rags to riches: Unlocking the value of antiques rarely results in a jackpot

Lake Junaluska resident Hattie Polk finally inched her way to the front of the line and released her clutch on what she believed to be an English monastery lantern dating to the reign of King Henry VIII, circa late 1800s — proudly offering it up to the antique appraiser with a glimmer in her eye.

Railroad, Jackson leaders at impasse on plan to bring train back to Dillsboro

The news of stalled talks between the Great Smoky Mountains Railroad and Jackson County was met with mixed feelings in the little village of Dillsboro, which once served as the hub for the bustling scenic railroad.

After 65 years, pool is back on the table for bars in Franklin

One-night trips into the Smokies

For day hikers who want to take the next step or for a seasoned backpackers who can’t find the time or resources to make that long trip this year, outdoor author Jim Parham is offering up the solution that is just right: the short backpacking trip.

His recently published book, Backpacking Overnights, details 50 one- and two-night trips in the Carolina Mountains. The premise of the book, and Parham’s philosophy, is that backpacking should be easy, accessible and fit into the schedule of the 9 to 5 working stiff.

It’s not quite the Jetsons’ flying car, but Jackson County is moving toward its own fleet of new-age vehicles powered by the emerging alternative fuel propane.

Caught red-handed with recyclables and nowhere to pitch them? Fret no more, Sylva

Recycling receptacles are coming to downtown Sylva soon, at last giving shoppers and strollers a green option for pitching their bottles, cans, cups and last week’s copy of The Smoky Mountain News.

The debate over the Jackson County Tourism Development Authority budget was bumped up another notch last week when dozens of business owners and members of the Cashiers community flooded a budget meeting demanding more money for the Cashiers visitor center.

Cat-Tran could be nixed for off-campus students

Western Carolina University’s off-campus Cat-Tran may soon go the way of the horse and buggy.

Adam Cartwright walked a thin line on the way back to his home in Cullowhee. He hugged the side of Ledbetter Road, feet on the white paint, and frequently stepping off the pavement onto the scrubby grass if he heard a car approaching.

The National Weather Service has confirmed that a tornado formed during an afternoon of thunderstorms and high winds that ripped through Western North Carolina two weeks ago.

Leaders of the Cashiers Area Chamber of Commerce are pushing for more funding from the Jackson County Tourism Development Authority in the upcoming budget year.

Franklin will soon be saying goodbye to its sitting mayor and longtime town politician Joe Collins. The Franklin native has announced he will not seek re-election in the approaching race, bringing to a close a 10-year stint as mayor and a total of 16 years serving in local politics.

Face of Sylva board may change come November

Sylva Mayor Maurice Moody has announced he will retire from town government and not seek reelection in the upcoming election. His departure, after 16 years on the Town Board of Commissioners, will leave a void of experience in local government and force Sylva voters to choose a new leader.

When moral Monday protestors gathered this week in front of the legislature in Raleigh to decrying the policies of conservative lawmakers, among them were a contingent of demonstrators from Western North Carolina.

Enthusiasts produce map with sampling of rides in Haywood

You’ve got your chain well-oiled, air in your tires and water in your bottles. You are all set for a bicycle ride in Haywood County but haven’t the slightest idea where to go.

To help lost tourists with bicycles mounted on their vehicles and locals who may not know the rural areas of the county, bicycle advocates and tourism promoters have teamed up to print a guide to six of Haywood’s best rides. For each route, the guide includes a map with an elevation profile, turn-by-turn directions, and a brief description on what riders should expect and the scenery they’ll encounter.

This year’s PlottFest will give hound enthusiasts from the region, across the country and around the globe a chance to celebrate their favorite breed of dog in its ancestral home.

Although the fledgling festival, only in its second year, will showcase a wide variety of mountain music, fishing and other events, this year, organizers have decided to place an emphasis on the pride of Haywood: the Plott hound, which has been deemed the state dog of North Carolina.

Macon County has it sights set on building a new soccer field in Highlands, one of the few mountain communities where the sport is king of the fall season, not football.

Cullowhee gets endorsement for land-use planning

Cullowhee community activists have finally made headway in a push to create a community land-use plan to regulate growth and development in the area.

While many professors and staff members enjoyed their careers teaching, assisting students and helping to keep the ever-growing Western Carolina University operating on a daily basis, retired life inevitability beckons. But a movement afoot hopes to maintain a stronger connection amongst former workers at the institution far into their golden years.

A good year to work for Macon: New pay plan includes salary hikes for everyone

Nearly two months after a majority of Macon County commissioners approved a slew of salary raises for all county employees, the nitty-gritty details of the pay hikes have been released.

A church is looking to bring a little more religion to downtown Sylva, but some local business owners, as well as elected officials, are skeptical of the move.

Sylva town leaders have chosen not to raise taxes next year and instead delay town expenditures, save money where they can and dip into reserve funds to shore up the budget.

Repairs to the dam at Balsam Lake in the Nantahala National Forest have been delayed because of high creek levels, leaving the popular lake drained as the Western North Carolina tourist season gets under way.

Site near Cowee mound saved from development, turned over to tribe

A mountainside in Macon County once destined for a housing development is now destined to be a community forest area comparable to the arboretum in Asheville.

The Hall Mountain Tract is a 108-acre swath of land overlooking the Cowee mound — a sacred Cherokee site — and the Little Tennessee River. Local conservationists and Eastern Band of Cherokee Tribal members have been pushing hard since 2005 to save the site from becoming a large subdivision.

State teaching center in Cullowhee could be shuttered by budget cuts

The North Carolina Center for the Advancement of Teaching in Jackson County had its funding slashed in half in 2011, and this year, Raleigh may finish the job.

Jackson County will begin building the first leg of a long-awaited greenway along the Tuckasegee River this summer.

The Cashiers Chamber of Commerce leaders claim they have been slighted their fair share of visitor center funding from the Jackson County Tourism Development Authority.