When I was nine years old, I once caught a 12-inch brown trout at the point where two small Jackson County streams, Cope Creek and Scotts Creek, converge. I ran all the way home with the fish in a large, leaky can and dumped it in waist-high concrete trough on our back porch that my grandfather had built. It was fed by a spring a quarter of a mile away. Our milk and butter sat in jars and crocks in this cold, rushing water, and for a while, my trout lived there, lurking behind jars of buttermilk and cream. When I would plunge my hand into that cold water and touch the back of “my fish,” it would surge and race back and forth in the trough, stirring up the sediment on the bottom. I fed it cornbread and night crawlers and it grew a bit. Ah, but my fish died one night when it attempted to catch a firefly. I found it the next morning, stiff as a cold pork chop with the firefly still glimmering in its mouth. There might be a moral there, somewhere.

When I opened Ron Rash’s Waking, I was glad to find my trout suddenly restored to me:

Caught by my uncle

In the Watauga River,

brought back in a bucket 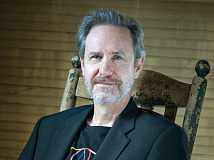 that pureness poured into

and soon it was thriving

on sweet corn and biscuits,

as I swirled the water

up in my palm cup

No doubt, untold numbers of mountain boys brought a trout home, and when they read this poem, I think that something in their hearts will hum like a resonating chord on a guitar.

To me, this resonance is the essence of Rash’s art: the ability to create an image so vivid, it unleashes the sleeping memories in the readers’ heart. For example, Nolan White, the Watauga clock-maker, who showed Rash how he “set each gear in place” and when the clock begins to run, the poet hears “that one pulse among many.”

However, some of the images are riveting and painful to contemplate: the “cold, beckoning eyes” in the face of a drowned girl trapped beneath a ledge in a river’s surging waters (like the girl in Rash’s novel Saints by the River); the grave of 13-year-old David Shelton (who may be found in Rash’s novel, The World Made Straight), who asked his executioners “a single mercy – to not be shot like his father, in the face.”

An especially memorable one is the luckless drunk, Charlie Starnes, whose alcohol-soaked clothing caught fire and suddenly, poor Charlie “wore a suit/ of flames” as he raced “through barb wire into/ a cornfield where they found him/ face down like a felled scarecrow.”

There are poems about pocket knives, an old woman’s treasured mirror, a pair of glasses removed from a grandmother’s dead face; an ancient shade tree, junk cars – family quilts, car tags on a barn wall, raspberries – all familiar details in the lives of the people whose descendants live in places called Dismal, Blowing Rock, Boone, Shelton Laurel, Spillcorn Cove and Goshen Creek. When defined by Rash, these objects come to resemble the unearthed shards or fragments of a vanquished culture. Wrapped in the language of a true poet, these “fragments” acquire a numinous or sacred quality.

There is also a marvelous cast of memorable characters. I especially liked the old veterinarian who specializes in womb-locked calves. He remembers a cold, winter night somewhere in Madison County “back in the 50’s,” when he confronted a panther “yellow eyes as bright as truck beams/black-tipped tail swishing before/ leaping away through the trees/ back into extinction.”

Then there is a marvelous monologue by an alcoholic “felled angel” who now sells serpents to snake-handling churches, noting that his “God now is a bottle of Jack Daniels.” However, the most poignant poem in this collection might be “Woman Among Lightning: Catawba County Fair, 1962.” This poem captures the anguish of a poor mountain woman who has fled a life “that leaks away like blood on land that is always wanting more.” She has come down to the fair grounds to ride the Ferris Wheel, which “dredges buckets of darkness out of sky.” While lightning flashes around her, she hangs suspended for a moment “above field and fence,” as far as “a fistful of hard-earned quarters can take her” from the bleakness of her life.

Finally, there is a recurring theme in Waking that might have special significance to readers who find a progression of ideas in Rash’s work. This collection is rooted in Rash’s growing interest in “racial memory,” or to be more specific, the Celtic tradition. Some of the poems in this collection stress Rash’s growing awareness of the bedrock of Appalachian culture.  Instead of turning to classical Greek or English mythologies, Rash has a preference for an ancient tradition that reflects his own experience – the ancient Celtic work, The Mabinogion. I believe that it is here, amid tales of magic and witchery – a world filled with the merging of incompatible things, where the dead return (“The Crossing”) and Time sometimes stand still – that Rash feels “at home.”

In the poem, “Resonance,” Rash describes “a trout alive in a burning tree,” an image that readily suggest the world of The Mabinogion, which, like Rash’s own work, teems with water in all of its aspects (floods, baptism, drowned towns, rebirth, etc.). It might be especially noteworthy that the poem, “Rhiannon” describes the plight of a character in The Mabinogion, who is falsely accused of murdering and consuming her own child. Her child has been stolen while Rhiannon sleeps (her enemies smear the sleeping woman’s face and hands with blood). In time, her child is returned to her and he becomes a famous Welsh hero, Peryderi.

If I have read this aspect of Waking correctly, I am delighted and frankly, I can’t wait to see what the world of The Mabinogion – a world filled with alternate universes, curses, a host of mythical beings, including the grandfather of Merlin, the magician in Arthurian legend – just how will this touch of the fey and strange affect Rash’s future work. I also feel that Rash’s use of the word “palimpsest,” which describes ancient manuscripts in which the original message has been erased but can still be discerned. A new message can be written on such a document, but the original message – like the faded traces of a milk trail through a pasture, remains. What is that dim message? Is it “a name carried far” from Wales to Shenandoah - a link to Appalachia’s “racial memory?”