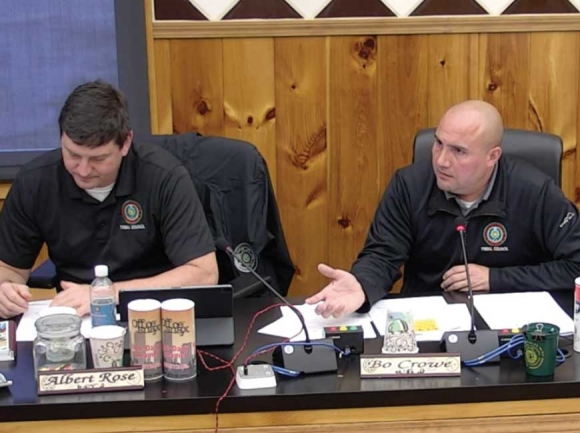 Tribal Council is considering an ordinance change that would require the tribe’ various boards and committees to publicly televise or stream their meetings.

Wolfetown Representative Bo Crowe, who submitted the ordinance, said that he crafted it in response to frustration he’d experienced requesting minutes from one of those entities.

“One of the issues that I’ve had that really got me started wanting to work on this ordinance here was asking for minutes and not receiving any of the minutes yet,” he told Council during its Feb. 6 meeting. “So the way I look at it if we can get them to where they start meeting inside the chambers and being aired, then we won’t have to worry about having to ask for minutes.”

The ordinance was tabled by unanimous vote, but not out of opposition to its contents — council members said they wanted more time to work out the details and ensure that the provisions would work in practice. For instance, while the council chambers are set up to easily record and stream meetings, as it is they’re often occupied with Tribal Council business. Some members were concerned that the ordinance as written would hamstring the boards’ ability to conduct business by creating a bottleneck on meeting space.

“I understand the concern, but I just want to make sure we’re not locking this building down to where it’s hard for anybody to even squeeze a meeting in,” said Chairman Adam Wachacha.

Crowe acknowledged that was an issue that could use some more discussion.

“I kind of figured that it wouldn’t pass today, that there is some stuff that needs to be worked on,” he said. “That’s one of them that we had discussed.”

Tribal member Becky Walker came to the mic to voice her support for the ordinance, saying that logistical concerns about meeting space should be a distant second to the need for transparency.

“If you deem it necessary that they carry out their business in the daylight like you do, then you have that full authority,” she said. “It sets right here in these chambers. A building space shouldn’t even matter. The transparency and the public trust that any of these boards and you are all responsible for should be apparently clear to the people in the community at all times.”

The ordinance does not specify the council chambers as the required location for such meetings — it simply says that the meetings must be televised or streamed and open to the public. Meeting at the councilhouse would simply be the easiest way to meet those requirements.

The ordinance also includes a clear definition of what a meeting is, something that is lacking in the ordinance governing Tribal Council meetings. According to Crowe’s ordinance, a meeting — as used in this section only — refers to a “majority congregation of the board, committee, etc. at the same time and location to hear, discuss, deliberate or take action on any item that is within the subject matter jurisdiction.” The definition also covers communications that are not carried out in person but are used to achieve the same effect. It does not prevent a majority of members from attending the same public gathering as long as no “subject business matter” is discussed.

Additionally, the ordinance lays out approved reasons for which a legislative body described in the section may go into closed session. These reasons include discussing a final draft audit, decisions regarding real estate and payment terms, advice from legal council, matters posing a threat to public buildings security and essential public services security, and personnel matters. The ordinance also incorporates the reasons for closed session included in the section of code dealing with Tribal Council.

However, the ordinance exempts the Business Committee, Housing Improvement Program Committee, Qualla Housing Authority Board of Commissioners, Social Services Committee and Enrollment Committee from its requirements. Hannah Smith of the Attorney General’s Office suggested that council members consider striking some of those exemptions.

“Our meetings are not open to the public,” Ann Davis, attorney for the TCGE, told Tribal Council during the work session. “Tribal Council is welcome to attend, as is the chief. Because of the fact that we have a management agreement with Caesar’s and in that management agreement which the tribe approved, any information that is exchanged between Caesar’s and TCGE is confidential and proprietary.”

Due to that fact, said Davis, the TCGE would not support a requirement to televise its meetings.

Attorney General Mike McConnell added that there may be similar restrictions on what meetings are and are not public for other boards and committees listed in the ordinance.

“All of these are either intended to be revenue-generating or dealing with, like with TERO, revenue that might be generated from a contractor, the idea being that politics are going to stay out of that management of the business side of the tribe,” said McConnell.

McConnell also echoed the logistical concerns brought up Feb. 6 about access to the council chambers, which is currently the only location set up to televise meetings. A better approach, he said, might be to make firm decisions as to what meetings or parts of meetings are and are not open to the public and then enact a deadline by which minutes of those meetings must be completed and transmitted to the Tribal Operations Program, where tribal members could easily access them.

Those caveats from Davis and McConnell appeared to resonate with several members of Council.

“I think there needs to be thoughtful review on this to see what the implications are from the standpoint of the welfare of the tribe before we get hasty, before we start going down a rabbit hole we can’t find our way out of and harm our people in the process of trying to help,” said Big Cove Representative Perry Shell.

Crowe, meanwhile, appeared to stand by his legislation, beginning to relate a recent conversation on the topic he’d had with an unnamed TCGE member. That conversation had given him some “heartburn” about the issue, he said. However, Wachacha stopped him to suggest he think twice before telling the story in open session.

At that point, council went off the air and into closed session, with the livestream showing an additional hour of meeting time during which video and audio were not provided. Sec. 117-13(b) of tribal code lists the reasons for which Tribal Council may go into a closed session, provided that a motion is made and adopted beforehand citing the reason. However, no reason for the closed session was stated.

Tribal Council could vote on Crowe’s ordinance during its upcoming meeting Thursday, March 5, but an agenda for that meeting is not yet available.