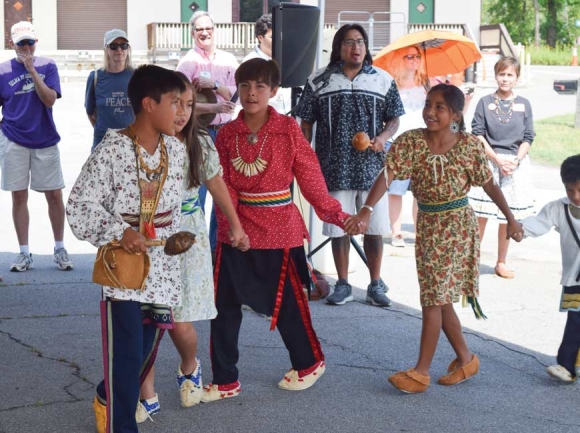 Cherokee children lead a traditional friendship dance at the Nikwasi Mound in Franklin. Barbara McRae (below, left) and Juanita Wilson, co-chairs of the Nikwasi Initiative, give the opening prayer in English and Cherokee. Jessi Stone photos

As Cherokee children joined hands with Macon County residents and led them in a traditional friendship dance in the shadow of the historic Nikwasi Mound in downtown Franklin, it became clear the vision set forth by the Nikwasi Initiative was already playing out before everyone’s eyes.

“What a great day that has been a long time coming,” Bob McCollum, a Nikwasi Initiative board member, said to the crowd gathered at Big Bear Shelter Saturday morning.

The day many thought would never come finally arrived in early May when the Franklin Town Council unanimously approved signing over the Nikwasi Mound deed to Nikwasi Initiative — a nonprofit entity representing the town, Macon County, Eastern Band of Cherokee Indians and Mainspring Conservation Trust.

“Think about for a few minutes the history that has taken place on this small patch of earth here, the culture that has been here for thousands of years, all of the events that have transpired right here at Nikwasi,” McCollum said. “And where we are today and where we will go in the future.”

Now that the mound is under the ownership of the nonprofit — after the town held the deed since 1946 — stakeholders wanted to bring everyone together to discuss what lies in store for the ancient mound located in the heart of downtown Franklin.

After giving the official welcome in the Cherokee language, Nikwasi Initiative board member Stacy Guffey said the board was asked many times why it was so important that the mound come under new ownership.

“I think if you look around today with our Cherokee friends, our Macon County friends and our Franklin friends, I think you see the answer to that question. And it simply is that together we can do great things for Nikwasi,” he said.

Principal Chief Richard Sneed spoke about the significance of the native mounds in the area and reflected on what life must have been like for his people. For thousands of years Cherokee ancestors lived in these mountains, he said. They raised families, they hunted and farmed, they traded, they had complex religious systems and complex social systems.

“I remember the first time being over at Cowee Mound and just looking along the side of the river and just imagining in my mind’s eye life thousands of years ago and seeing the village all along the side of the river. And then I thought about how their way of life was brought to an abrupt end with the stroke of a pen. When the President Andrew Jackson signed the Indian Removal Act and maybe 30 years after the removal of our people, only a small remnant of Cherokee remained in these mountains. These are my ancestors,” Sneed said. “Their perseverance, their grit, their tenacity is the reason our people remain today and their spirit of perseverance is in our DNA.”

Today, Sneed said, the members of the EBCI carry on that tradition of preserving their heritage, culture and way of life, and Nikwasi Mound was an important part of that heritage and way of life.

Though the town council voted unanimously to deed over the property, the decision wasn’t without a swath of controversy in the months leading up to the vote. Mayor Bob Scott and several members of the community were adamantly against transferring ownership, claiming the board didn’t have such authority under the 1946 deed.

The deed states that the mound “shall be preserved for the citizens of Macon County and for posterity.” Some people interpreted that to mean the town had to maintain ownership of the mound indefinitely, but Town Attorney John Henning Jr. assured council and residents that was not the case. While it must be maintained for posterity, the deed does not require the town to keep the property forever.

Five Macon County residents even filed for an injunction to prohibit the town board from signing over the deed to the Nikwasi Initiative, but later asked for it to be dismissed without prejudice because the legal battle would cost too much money.

The fight over ownership of the Nikwasi Mound has been going on for much longer. The issue last came up in 2013 when Michell Hicks, former Principal Chief of the EBCI, asked the town of Franklin to give the property back to the tribe. In response, the town council passed a resolution declaring that the mound would stay in town possession but that the board was open to working out an agreement with the tribe for them to maintain the site.

After that, Mainspring began to work closely with Cherokee and Macon County residents to develop a collaborative plan to promote the historic value of the mound, an effort that would later become the Nikwasi Initiative.

“At a time when there is so much energy given to division and argument, the people in our communities, the Eastern Band and the people in Franklin and Macon County, they’re chosen a different topic and energy. And that’s the energy that has brought us together as partners moving into the future,” McCollum said.

The Nikwasi Initiative’s initial idea nearly seven years ago was to develop a cultural corridor starting from the headwaters of the Little Tennessee River and extending all the way to the Qualla Boundary. McCollum said that project is already underway with informational kiosks being installed at the Cowee Mound with more educational interpretative sites planned for Cowee Valley. Kiosks will be installed next at historic sites in Cherokee and Nikwasi Mound.

EBCI also purchased the former Dan’s Auto property on East Main Street adjacent to Nikwasi Mound and is currently working on a feasibility study to determine the best way to construct an annex to the Museum of the Cherokee Indian. That feasibility study will turn into a development plan for the museum and educational displays for the Nikwasi Mound.

“We’re going to be designing and distributing maps to the cultural corridor geared toward education and an accurate accounting of the history and culture of the Cherokee,” McCollum said.

The Nikwasi initiative also will be designing a bike trail from Cowee Mound, by the Historic Cowee School, up Cowee Mountain to the waterfall located on the Alarka Laurel property.

ECBI has also acquired property on the Hall Mountain side of Cowee and have exciting plans for that property as well.

The Macon County Women’s History Trail, a project taken on by the Folk Heritage Association of Macon County to highlight the many contributions of women throughout Franklin’s history, is the first of its kind in the state of North Carolina.

Now that the trail markers are installed, the history trail group — led by McRae and Mary Polanski — is fundraising to install a public art piece near the Nikwasi Mound. The proposed sculpture would depict three important women from Macon County’s history that represent the Cherokee, the white settlers and African Americans.

“The Women’s History Trail project through thoughtful re-examination of our local history has brought to light many forgotten stories from all of our cultures and ways of life. They give us important clues about who we are as a community today,” Polaski said. “The goal is that this monumental sculpture will stand here at this important site and evoke contemplation of our common threads as a community.”