One Way Out — Gregg Allman 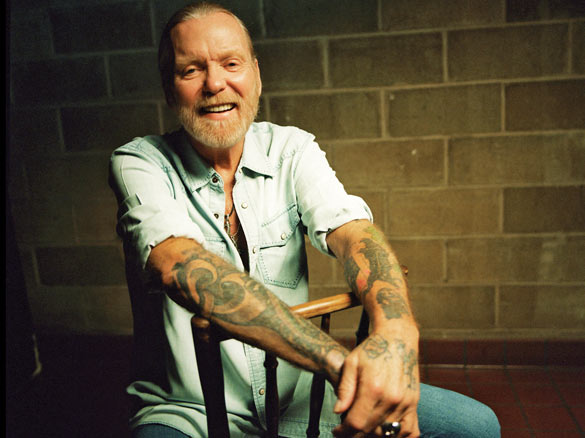 It’s the soundtrack of America.

Forty-five years ago, The Allman Brothers Band burst onto the scene. With an intoxicating blend of squealing LA rock-n-roll, poignant Greenwich Village folk and bayou voodoo blues, the Macon, Georgia band plugged in and kicked off a whole new genre of sound — Southern rock.

Their words are voices in the night, calling out to us either out of love or out of pain. Their melodies are the unrelenting spirit of what this country was founded on. It’s the idea of the rebel, the outsider. It’s seeing the world at a unique angle, one that encompasses the notion of always running towards the horizon, never giving up, and knowing that, in life, nobody makes it out alive.

When you first listen to The Allman Brothers Band, something immediately clicks in your head, almost as if a light switch on the world around you was turned on. You start to see and hear things in a different, more keenly aware state of being.

Listen to “Ramblin’ Man” or “Midnight Rider” and you find yourself yearning for the unknown that resides right outside your front door. Throw on “Melissa” or “Jessica” and ghosts of femme fatales and loves lost flood your field of vision. Amid the immortal “Whipping Post” one can channel the anger and rage of a lost and troubled soul, where you are utterly captivated by the piercing guitar licks of Duane Allman and Dickey Betts, pounding organ strokes of Gregg Allman, shattered heartbeat bass rhythm of Berry Oakley and thundering percussion of Jai Johanny Johanson and Butch Trucks.

As the decades have worn on, faces have come and gone within the band — some six feet under, as seen with the untimely and tragic deaths of Duane and Oakley, and others simply disappearing into the abyss of the music industry. There has also been rebirths, as seen with the additions of six-string aces Warren Haynes and Derek Trucks over the past 25 years. And yet, through it all, one thing has survived — the music.

The Smoky Mountain News recently caught up with Gregg Allman in the midst of his current solo tour, which will slide into Harrah’s Cherokee on Jan. 16. He spoke of the The Allman Brothers Band packing it in in 2014, how his health is these days, and how turning 67 is but a number.

Gregg Allman: I’m a pretty private person. I like to be home. I enjoy time with my friends and family, riding my Harley and painting a bit. I’m a dog lover, I’ve always had a dog, ever since I was a kid. Maybe it’s hard for people to understand that, but I’m a bit of a homebody.

SMN: You just turned 67 years old. What does that number mean to you?

GA: I don’t think about numbers — age is just a state of mind to me. I feel good and I’m looking forward to the things I still want to do, not backwards. I don’t live in the past at all.

SMN: You hear so many rumors about your health. How are you feeling these days?

GA: Feeling fine, man, thank you very much. I’m taking good care of myself these days. I eat healthier, and I try to get enough sleep, even though that can be tough when I’m on the road.

GA: Forty-five years is a long, long time for a rock band — it’s a long time for anyone to do anything. We went out on own our terms, and I know my brother would have been proud. One thing I learned a long time ago about this band is to never say never, but at this point, we have nothing planned. Everyone is happy to be busy with their own projects, including me.

SMN: Why has having that solo outlet been important to have?

GA: What I like best about playing with my solo band is there’s only one cook in the kitchen, if you know what I mean. With the Allman Brothers, things could get pretty complicated, there were a lot of moving pieces involved. Playing solo has been important to me for the last 40 years, ever since I was told “Queen of Hearts” wasn’t good enough to be an Allman Brothers album. That comment led me to record “Laid Back,” my first solo record, and I’ve been doing that ever since. It’s a great outlet for me, and it allowed me to go back to the Allman Brothers for all those years feeling refreshed and ready to go.

SMN: How would define the current state of rock-n-roll music? People always say every generation how it’s dead. There are lots of great rock-n-roll acts still out there, but not as much in the mainstream.

GA: Well, that depends on what you call the mainstream, man. Most of today’s bands don’t worry about radio play, they make it the old-school way by playing live, just like we did back in the early years. Look at a young band like Blackberry Smoke, they have a great following, and they ain’t on the radio, man. They’re out on the road, doing it one show at a time.

SMN: What has a life playing music taught you about what it means to be a human being?

GA: Music is an escape for people. They can go to a show, dance and sing along, and then leave with a smile on their face, because they were able to forget about their problems for a few hours. I’ve come to really understand that, man, and that’s my goal at every show — I want people to leave feeling good, brother.

Rock and Roll Hall of Famer Gregg Allman will perform at 9 p.m. Friday, Jan. 16, at Harrah’s Cherokee. Tickets are available at www.harrahscherokee.com or www.ticketmaster.com.